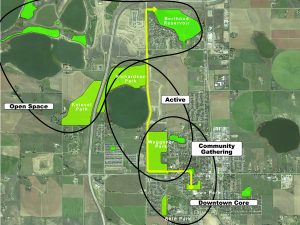 Monday night at the Berthoud Town Hall boardroom, the Berthoud Parks, Open-Space, Recreation and Trails (PORT) Committee presented the master plans for the proposed recreation center and parks expansion in town. The presentation was well-attended with over two dozen members of the community filling the public seating area in the boardroom.

Nicole Horst, one of the principals and the lead coordinator from WENK Associates, the landscape architecture firm contracted by the town to develop the master plans, led the presentation. Due to IT issues that have been on-going in the boardroom, the use of slides was unavailable and thus Town Administrator Chris Kirk passed out paper copies of the concept plans for the various sites.

The master plans laid out Monday evening included four different areas to be developed and upgraded. They were, Knievel Park, located due west of Loveland Reservoir on the western side of US 287, Richardson Park on the north shore of Loveland Reservoir and south of the Hammond Farms development, Waggener Park, located on the northeastern corner of the intersection of Berthoud Parkway (formerly County Road 17) and Mountain Avenue and, finally, Town Park, located north of Ivy Stockwell Elementary School to the west of Fifth Street.

Two separate plans, labeled “Plan A” and “Plan B,” one which included the proposed recreation center and one that did not, were presented for both Richardson and Waggener Parks. “The rec center is something we’ve been trying to place in the right location and there’s two sites we’re looking at for that right now, Richardson and Waggener,” Horst explained.

At the beginning of her presentation, Horst explained the concept plans were somewhat rough, as WENK began the project just one week prior to the presentation. “If you see something you don’t like, that is completely expected in this process. What we’re trying to do is gather input,” Horst said. “What we’re trying to do is develop a vision for a 15- to 20-year plan with a five-year strategy of how to get there, phasing the build-out. We want to find what’s feasible for Berthoud and also implementable.”

The broad concept of the plan encompasses three distinct but also somewhat over-lapping areas. On the properties located at the most northwestern parts of town, there is a heavier focus on open space. This area, which included Knievel Park, was outlined to also include the area adjacent to TPC Colorado as well as the area around Berthoud Reservoir. Richardson and Waggener Parks are designated as “active areas,” while Waggener is also in the zone with Town Park in what are dubbed “community gathering” locations. Said Horst, “From a big-vision standpoint, that’s how we’re looking at those individual sites.”

The concept around Knievel Park features a loop trail, a dog park (with potential of an off-leash area given the large size), an arboretum, a large grassy area for star-gazing – something Horst noted was unique to Berthoud, given the town’s observatory – and distinctive recreational amenities that included a disc golf course and archery range.

The “Plan A” version for Richardson includes the rec center that will feature areas for court sports, an indoor and outdoor pool, and dry recreation area (various exercise equipment). With the rec center, this area also has plans for outdoor soccer and baseball/softball fields, a pump track/BMX park, a water-side amphitheater and water-front promenade on the north shore of Loveland Reservoir.

The “Plan B” concept for Richardson does not include the rec center (which in such case would be located at Waggener Park) but includes more baseball/softball fields, soccer fields, outdoor basketball and volleyball courts and a playground. Both versions include the amphitheater, water-front promenade, BMX Park, pavilion, open space/natural areas, trails, and ample parking.

The Plan A concept for Waggener, which assumed the rec center would be constructed at Richardson, was presented with a circular design with the various fields located both in the center of the facility surrounded by open space. The south end of this concept, directly bordering Mountain Avenue, is a large natural area. From the center a connection to Franklin Avenue is proposed, as well as a buffer between the homes on 10th Street and the facility. Plan B has the majority of the facility, including the indoor rec center and its outdoor components, located at the eastern end of the property. Like Waggener Plan A, the southern and eastern portions are left largely natural and open, providing a buffer between Mountain Avenue and the homes on 10th, respectively.

Under the comprehensive plan, the indoor and outdoor pools will be located in and around the proposed rec center, and thus the current Berthoud pool at Town Park will be removed and replaced with what is called a “splash pad” and interactive fountain area, using the existing water supply infrastructure already in place. As Kirk explained, “The pool we have is maxed out on size. We reach capacity on a regular basis when it’s hot outside. As the footprint grows (to accommodate more use) it doesn’t fit in Town Park anymore … having two facilities will require substantial additional operations and maintenance costs.”

In addition to the splash pad, the proposal for the renovation of Town Park includes a pavilion and band stand, some sports courts, a large playground area and open lawn leisure, ideal for events like Berthoud Day.

This Thursday there will be a community open house from 5:30 to 7 p.m. in the boardroom, where citizens can provide input for the recreation center and parks plans that were presented Monday night. Representatives from WENK, the PORT Committee, and the board of trustees will be available to gauge input and answer questions.