Two Berthoud residents wanted to network with other business professionals and needed a place to do it.

Berthoud businesses agreed to open up their spaces once a month to bring in the Berthoud Networking Group that formed in October. The group meets at a different business, usually the third Tuesday of the month, to network, build relationships and learn about different businesses in Berthoud and beyond.

“There’s a need to network if you have a small business, and it’s a great opportunity to support the community,” said Carissa Finnegan, owner and social media manager of Social Butterfly Media Management LLC and co-founder of the networking group with Justin Halverson, a financial advisor with Northwestern Mutual Wealth Management Company. “A lot of times we drink and talk business. We get to know each other as businesses owners.”

So far, the group has met at One Point Six North, City Star Brewing and Hale & Bradford Distillery Tasting Room, which volunteered to host the meetings at no charge. The next meeting will be 5:30 p.m. Jan. 22, 2019, at Academy Mortgage Corporation, 923 Mountain Ave. 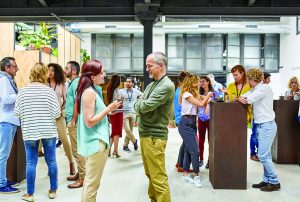 Up to 25 people have attended the meetings, and meetings are held in the whole facility or in a designated area, such as a barrel or meeting room.

“There are so many businesses in Berthoud people don’t know about, so we’re trying to get the word out,” Finnegan said. ”Seeing all these people that can benefit from each other is really cool.”

The group had its start when Halverson posted on the Berthoud Community Facebook page asking if there was a place for local businesses to network, and several people responded, expressing interest in starting a new gathering spot. Finnegan, who manages social media platforms for small businesses, offered to handle the social media for the group but soon became a co-founder, she said.

“I started that group because I put out a couple of feelers and people were really interested in it,” Halverson said.

Halverson wanted to connect with other business professionals in Berthoud to find out about the local businesses and to keep dollars local, he said. He also asked the restaurants and bars about their slow nights, which he found is typically on Tuesday, so he scheduled the meetings that day to bring more business to them, he said.

“More than anything it’s building relationships, understanding who’s in the community and getting to know the businesses that don’t have a big lit up sign on main street,” Halverson said.

Business professionals and community members can attend the meetings, join the Berthoud Networking Group Facebook page as a member and to promote their business, and sign up for the group’s email subscription service.

“Berthoud has really been slow to grow, but I think this really helps not only with not really growing the community but growing the businesses in the community, just to have more people shop local and really support small business,” Finnegan said.

Finnegan hopes to get a few more people involved or establish a committee to grow the group even more, she said. To learn more about the group, email [email protected],com, call 303-304-7663 or send a Facebook message.

“We’re a lot of fun, and it helps the businesses we actually go to,” Finnegan said. “I plan on going back to these places because they were so amazing, and I didn’t even realize they were there.”