The appeal of going to a farmers’ market and a farm-to-table dinner boils down to two words: fresh and local.

Berthoud Local, a nonprofit that supports agriculture in the Berthoud area, sponsors both to give the public access to locally-grown produce at a summer farmer’s market and to demonstrate how that produce can befit the dinner table. 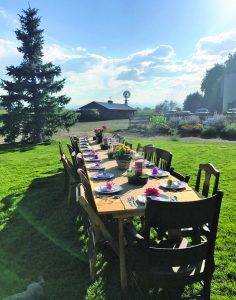 Courtesy photo – The dinner table is set at The Farmer and Adele in Berthoud area for the annual Farm to Table Dinner event hosted by Berthoud Local. This year the event will be Sept. 22, and the final Berthoud Local Farmers Market.

“We want to connect local people with local farmers, local producers and local artisans, so that people in our area can make that choice to spend their money locally,” said Vickie McLane of Berthoud, president of Berthoud Local.

The fifth annual Farm to Table Dinner will showcase local food, wine and beer from the Berthoud area during a sit-down dinner with appetizers, salad, an entree and dessert. The dinner will be 6-9 p.m. Sept 22 at The Farmer and Adele, an 18-acre vegetable and herb farm southeast of Berthoud at 19417 W. County Road 3.

“It started as a way to showcase all the wonderful local food that we have around this area and as a way to let people know who their local farmer is,” McLane said.

The ingredients for the dinner will come from local producers and be prepared by chefs from One Point Six North, a new tapas restaurant in Berthoud. The desserts will come from Rise Artisan Bread Bakery and Cafe in Berthoud and local Berthoud resident, Darlene Helsel, who sells her goods at the Berthoud Local Farmers’ Market.

Berthoud Local volunteers will serve the food and beverages, including wine from Blue Mountain Vineyards in Berthoud and Plum Creek Winery in Palisade, which distributes its products in Berthoud.

Pennies on the Track, a Front Range acoustic folk trio, will provide entertainment for the event.

“It’s going to be lot of fun because we’ll have local food and local alcohol, and it’s a neat way to connect with the rest of the community and understand where your food comes from,” McLane said.

Last year Berthoud Local sold 50 tickets to the event and raised $3,000. Tickets are $75 and can be purchased at berthoudlocal.org or at the Berthoud Local manager’s booth at the farmers’ market.

The event is a fundraiser to support Berthoud Local, which hosts the farmers’ market in Fickel Park every Saturday from late June to late September, the Community Garden at Pioneer Park, and a yearly educational series on agricultural-related topics, such as fruit-tree grafting and amending healthy soils. The nonprofit, mainly operated by volunteers, was incorporated in 2014 to support local businesses, the local food movement, and access to local food.

Berthoud Local will celebrate the last farmers’ market of the season 9 a.m. to 4 p.m. Sept. 29 with the Farmstand Band in Fickel Park. There will be food trucks and live music headlined by the Wendy Woo Band, a songwriter group from Denver. There also will be a wider variety of vendors than at the regular farmers’ markets, including local produce, local meats, breads, Western Slope fruits, honey, canned goods, jams, pickles and kettle corn. Plus, there will be service-oriented businesses and groups providing information about their offerings.

The name of the Farmstand Band comes from an activity during the event’s first year in 2014 where attendees were invited to make instruments out of vegetables and play them in a band.

“That didn’t go as planned, and we didn’t keep that activity, but we retained the name,” McLane said. “It’s something fun and different, and people can ask questions about it.”

This year, some of the Farmstand Band activities will include contests, such as dress your favorite veggie, bring your giant zucchini, hula hooping and chicken bingo with guesses on which square the chicken will take a bathroom break. Part of the proceeds from chicken bingo will be donated to the memory of the late Robin Francis, who was involved in the farmers’ market. There also will be face painting.