Sometimes things can fall into place just the right way.

That is case for Michael DeWall, newly-minted assistant principal/athletic director for Berthoud High School (BHS). DeWall, who had previously served in the same capacity for Woodland Park High School, watched his only child graduate from high school in May. After speaking with his wife, the two empty-nesters decided they wanted to return to Northern Colorado, and at the same time DeWall found the opening at BHS. 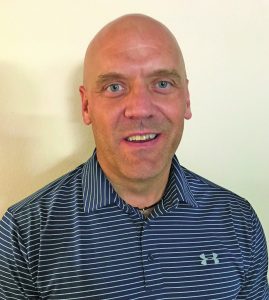 A native of Florence, Colo., DeWall played football at Bethany College in Kansas, where he earned his teaching credentials. DeWall returned home and got his first teaching job at his alma-mater, where he also began a high-school coaching career. A move to Platte Valley High in Kersey, Colo., brought DeWall an eventual football state championship in Class 2A in 2007 (coincidentally, the same year BHS won the state title in 3A). A brief, two-year stop at Thompson Valley preceded the move to Woodland Park but provided DeWall with valuable insight in the R2J district.

DeWall explained he and his wife wanted to remain in Woodland Park while their daughter completed middle and high school because, “we wanted that stability for her,” but after she graduated “I saw the opening for the Berthoud athletic director job and jumped at that. It was nice to get back up to Northern Colorado.”

As the assistant principal DeWall will wear several hats and have a variety of roles that include handling all matters related to athletics, and other co-curricular activities, and supervising the custodial and maintenance staffs. Additionally, DeWall and new BHS Principal Sarah Beth Bliss will split supervision and evaluation of the school’s academic departments, and DeWall will work closely with the dean of students, a position new to BHS this year, on student discipline matters.

DeWall outlined his broad array of responsibilities thusly, “It’s a partnership that Sarah Beth and I have within that building. We’re the leadership team, and she definitely has her strengths and her passions and a vision for how she wants the climate and culture of the building to be, so my number one role is to support that vision.”

As the athletic director, DeWall, who has a long history as a coach of multiple high school sports, said his primary job in that capacity is “to be a facilitator for (the coaches), make sure they have what they need to move in the right direction. If you have someone with a good vision, with good core values, then my work is just to remove any obstacles for them to get their work done.”

DeWall explained he will be making a couple of coaching hires in the near future for the boys soccer team as well as the new girls swimming team. Said DeWall on the coaching searches, “I am going to start inviting applicants … there have been some people in the district interested, it looks like we’ll be able to get someone high-quality.” DeWall also said he plans to gauge the feasibility of adding a boys swimming team in the future.

“One of the things I will do is to make sure co-curricular activities are something that Sarah Beth can rest assured will be done well and done with fidelity,” DeWall said. “It’s also important that academically those teachers and those departments I supervise need to be doing things right and doing things well, with an eye on achievement.”

DeWall echoed Bliss’ comments that the school has a chance to start fresh with a brand-new leadership team. As DeWall said, “It’s going to be really cool that, leadership wise, we have Sarah Beth, myself, a new dean and a new (school resource officer) so we can really look at what we need to do from a climate and culture standpoint in our building with the four of us working together.”

DeWall stressed the importance of building relationships with every student in the building, calling it, “one of your strongest, your best and most consistent tools,” in both good times and bad. He continued, “You have to be able to make a connection with every kid that walks through those doors and somebody will. There is a kid that is going to need a connection with you as an adult in the building and doing the work necessary to build those relationships will be critical.”

As the assistant principal DeWall said he will work this fall on helping get support behind the proposed funding measures that are going to be on the ballot for the Thompson School District. “Bonds for Thompson School District are really tough because you have so many divergent interests … so you have to communicate at the district level for our needs, and that’s one of my roles is to be a champion for our school … there will be a lot of information sharing,” he said.

“We have an opportunity to move forward as a school with new leadership, and so our vision is going to be about not throwing out the baby with the bath water, because there’s a lot of good things going on, so Sarah Beth and I are going to work hard to figure out the areas for growth and go after those things accordingly,” DeWall said.