By Angie Purdy
The Surveyor 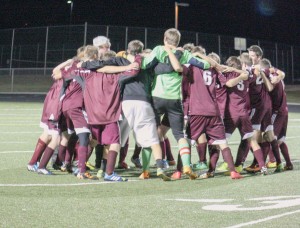 The Berthoud High School boys soccer team comes together after its final game against Mead on Oct. 15.
Angie Purdy / The Surveyor

The Berthoud High School boys soccer team wrapped up its season last Wednesday against Mead. And despite being a rough go for the Spartans, losing the contest 0-1, they came out victoriously with a never-quit attitude throughout a no-win season.

It was another loss for the Spartans who didn’t win a game all season, but it’s a little tougher losing by a single goal.

“It was a fight until the end for the Spartans,” said head boys soccer coach Jason Hughes. “Their determination and persistence was evident throughout the entire 80 minutes of play. A loss is tough, but a 1-0 loss can be a hard pill to swallow.”

For five Spartans, including: Sam Hulshoff, Cole Smith, Aaron Decker, Kirby Skoric and Kenny Ries, it was their last time on the high school’s soccer field. The seniors had some advice for their teammates as they played their final game.

“Enjoy it while it lasts,” said Skoric. “It seriously goes so fast; it’s ridiculous.”

Skoric said that in spite of the losing season they had to focus on the fun of playing.

“Soccer’s all about having fun, win or lose,” Skoric said.

Decker kept his head up and encouraged his teammates to do the same, averaging 18-20 saves on goal per game this season. Decker will miss playing with friends the most.

While Hulshoff’s advice to the underclassmen is to never back down. And this young soccer team never did.

“They improved with each game and became a team,” said Hughes.