The old adage that good things come to those who wait has once again proven its worth.

Even though she had completed her senior year and received her diploma, newly-minted Berthoud High School (BHS) graduate Kyleigh Milan’s long-held dream of playing college sports came to reality as she signed her National Letter of Intent in a small ceremony at The Cheesecake Factory two weeks ago. 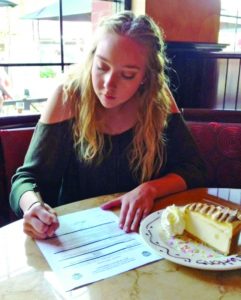 Kyleigh Milan signs her letter of intent at the Cheesecake Factory.

Milan, who will join the women’s basketball team at Laramie County Community College (LCCC) in Cheyenne, Wyo., explained wrestling over the decision of where to play was the most emotionally-taxing part of the process. Having received interest and offers from other schools, Milan said it was critically important to her to remain close to home, citing closeness with her family.

“I had gotten a few contacts over last summer … I didn’t really start getting offers until September, and I had other schools look at me but a big thing for me was location,” Milan said. “There were some schools that were like, three hours away or five hours away, or out of state, and I didn’t want to go that far. I’m really close with my sisters and want to watch them in their sports.”

Milan explained she realized playing collegiality became an attainable goal during her junior year. She said her club team, the notable Colorado Elite Club on which her BHS teammates Kristina Cavey, Sydney Meis and Emily Cavey all played, helped her not only to hone her skills on the court but build the contacts and get the recognition needed to play at the next level.

“Kristina (Cavey) and her whole family really helped me out a lot,” Milan said. “I learned I could become a better player, and I knew I could work hard enough to get to the college level.” At over six-feet tall, Milan said she “worked on a lot of post drills,” but her club coach helped her work on her ball handling and outside shooting abilities as well, that “showcased some diversity of how I can play.”

Despite her participation with Colorado Elite and a senior season at BHS where Milan was the team’s starting center, a team captain, and the Lady Spartans made another trip to state, she did not receive an offer from a school that she felt was a good fit. Milan said as she saw other BHS student-athletes as well as teammates from Colorado Elite sign, it was “a bit discouraging, but as time went on I realized I really need to focus on what I need to do … it was very frustrating but once I figured out where I was going I was very comfortable with my decision.”

Milan explained that, despite some frustration, she remained patient and kept her focus on the ultimate goal. “I had talked a lot to my club coach and she really helped me walk through all the steps and get me familiar with what I was going to be doing, and I just knew when I saw them sign that I knew I was going to be there one day when the time was right,” she said.

Milan said she has not decided on a specific major but she ultimately wants to become a physical therapist. She said LCCC has a good pre-PT program and she has the option to continue her collegiate basketball career after two seasons at LCCC as Head Coach Brian Ortmeier has a record of success helping his players move on to other programs.

As many BHS student-athletes over the years who have reached the level of success to play at the next level have admitted, the recruitment and selection process is one that teaches them a great deal about themselves. Milan is no different, saying, “I’ve learned that I am more patient than I thought I was because I was getting very frustrated, but I had to take a step back and realize that I am doing okay and wait; when the time is right the time is right.”

Patience is indeed a virtue.