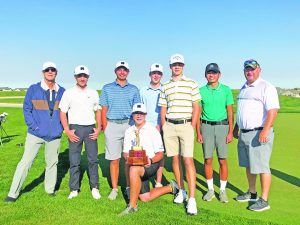 Playing in their final team round of the season, the Spartans took to the links at Loveland’s Olde Course and assembled their best collective showing of the season. Berthoud won the R2J District championship for the first time in program’s history and did it thanks to a spectacular showing from all six players who competed.

“They said we’re not done with this season while most teams have even packed it up even a week ago before regionals. They said, ‘I’m proud to be a Spartan and I can’t wait to continue this legacy they’re starting to build,’” said Berthoud Head Coach David Hunn. “This is a nice icing on the cake to win something Berthoud hasn’t ever done in the past over 20-something years.”

Lochlan McNair led the way for the Spartans by carding a season-best 79 while senior Charlie Hoskins turned in his second-best round of the season by shooting an impressive 81. Christian Foxworth, who last week qualified for the 3A state championship meet held next week, turned in an 89, the same score as teammates Landon Kuntz and David Sarmiento. Coyle Hagerty shot 95 to round out of the six-man score for the team.

“It’s really nice to see that they didn’t give up after what we considered a disappointing regionals with only guy for sure in (state) and another guy as an alternate. It was great for us to show that these kids still wanted to compete and wanted to take out their opponents in an event where we count six players where we typically county three or four and everyone has to pull their weight, one kid can’t have a bad round,” Hunn said.

Hoskins shot a 79 earlier in the year but unfortunately struggled at the regional championships, shooting an 89 that a few strokes too many to qualify for state. While Hoskins admitted he was disappointed with the results at regionals, he knew he had one final chance to leave his mark on program which he has been a tremendous part of building.

“Going into the tournament I knew it was my last chance to really do something for the team so I went in with a lot of confidence and I think I played pretty well and I hoped the team would as well. We really showed up and played our best rounds of the year,” the team’s lone senior said and added some great perspective in saying, “I feel like this is a good program, I was proud to play for Coach Hunn and Coach Perry and a lot that I’ve learned I can take with me that will help me throughout my life.”

Hoskins set a terrific example for the younger players on the team, in both good rounds and rounds where he had some ups and downs and, as Hunn explained, he always carried himself in a manner that made his teammates take notice.

While will be missed, the future is extremely bright for Berthoud golf. Hunn has more players coming out, 14 this fall on the boys side and 18 already confirmed for spring for the girls team.