Cross country races are truly becoming a game of cat and mouse chase this year. Restrictions on the number of athletes allowed per race has led organizers to use a wave starting system.

Berthoud High School (BHS) cross country runners started in the second of four waves at the Cheyenne Mountain Stampede Pre-State meet on Friday. Waves were spaced only 45 seconds apart with 25 runners in each wave. Therefore, the faster athletes began catching up to the wave in front of them before the first half mile.

Such was the case for Berthoud’s Olivia Krueger. She led the second wave, weaving through like a cat chasing the first wave athletes and she was also like a mouse wondering if someone from another wave might be catching up to her. 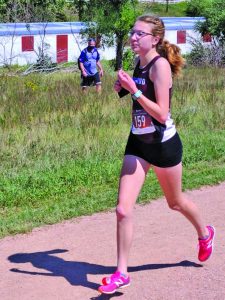 One thing she knew was that her BHS teammates were close. Jaycee Williams was sticking to Krueger like glue. The freshman ran in Krueger’s shadow and finished just one second behind her. Ally Padilla and Ellie Sundheim were close behind through the mile.

The Spartans looked like they might be the team to beat until Padilla had to drop out of the race due to an injury and suddenly much more pressure was on Josie Diffendaffer and Megan Malherbe. Diffendaffer, a junior, is a recent transfer to Berthoud from Cheyenne Mountain, so she was very familiar with the course. She seemed to effortlessly power up the hills that she has trained on the past two years. Freshman Megan Mahlerbe was the final scorer for Berthoud.

“It was fun! We were in wave two and it gave us lots of people to chase down. The waves were pretty small, not all dust and elbows like usual,” Sundheim stated.

The senior improved almost a minute over her best time on the course. “It was weird finishing in the empty stadium,” Sundheim continued when asked about the restriction of spectators. “They played music and tried to keep it entertaining, though.”

With one wave catching up to another, no one knew what their placing was until final results were tabulated. The Berthoud girls team finished fourth out of 16 teams with 122 points. The Classical Academy won with 20 points, Faith Christian had 59 and Holy Family was third with 101. Berthoud’s individual placings: Krueger was sixth, Williams seventh, Sundheim 11th, Diffendaffer was 40th and Malherbe finished in 58th place. “Megan is having a great start to her freshman year!” complimented Sundheim.

Unfortunately, Berthoud’s boys also had a top runner drop out of the race. Eli Greenslit was in the top ten through the first two miles, but an injury forced him to withdraw. Nick Williams, winner of last week’s home meet, stepped up and finished 29th.

“Nick was our top finisher; I think he’ll have a great season,” complimented Sundheim.

Williams had never raced this course before but fellow senior Lane Pirkey has raced on this course at state since his sophomore year. This meet, Pirkey placed 48th overall. Afton Cooper was 53rd, Evan Torres was 55th and Daniel Hatton finished in 63rd place. The Spartans finished in tenth place in the 16-team field.

The Colorado state course is considered one of the more difficult to navigate. This Pre-State meet gives athletes an opportunity to see the course that awaits them in October, provided they qualify. The season has been compacted due to COVID-19, so the state meet is only five weeks away.

This experience will help the Spartans because the state meet will be run in waves with the top four ranked teams in the first wave, the next four ranked teams in the second wave, etc. Team ranking becomes much more important this year than in previous years. The Spartans will take another trip to Colorado Springs to compete against The Classical Academy next Friday, Sept. 18. Thompson Valley and Loveland are also expected to attend.