The season starts now for the Berthoud High School (BHS) girls basketball team. Sure, the team has been playing meaningful basketball since early December, but after finishing the regular season with an impressive 18-5 overall record that included a 12-4 mark in Tri-Valley Conference (TVC) play, the Lady Spartans earned the No. 8 seed in the 48-team 4A state tournament that tips off this week. 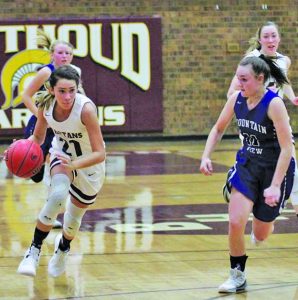 Photo by Tiffany Rafferty – Berthoud’s Ally Padilla races past the Mountain View defense in a game at BHS earlier this season. Padilla is a key part of a deep and talented Berthoud squad that earned the No. 8 seed in the 4A state playoffs that begin this week.

With the No. 8 seed, Berthoud enjoyed a bye for the opening round of the tournament and will play No. 40 Widefield, who on Tuesday night defeated No. 25 Weld Central on Friday, Feb. 22 at BHS. A win would propel the Lady Spartans to the Sweet 16 round, which they would also host.

“It’s just really great for us to get that eight seed because it means we will get some home games,” Berthoud Head Coach Alan Gibson said. “The work these girls have put in since November and the way they’ve worked throughout its great to see them get rewarded.”

Berthoud closed out the regular season with a pair of back-to-back TVC road games last Friday and Saturday. The Lady Spartans dominated Skyline, winning by a 59-40 final with a lot of key players resting on the bench for most of the second half. Berthoud then dropped their final regular season game the next day, falling by a 52-41 final to No. 2 Holy Family.

Against Skyline, Berthoud jumped out quickly and did not look back. A lay-up from junior Emily Cavey was followed by a steal from Maddie Barcewski who found Eriana Rennaker for a quick three-pointer to give Berthoud an 8-2 lead just a minutes into the game. Cavey would drain a three of her own soon after as Berthoud built a 15-7 lead in the opening quarter.

The first quarter was just a preview of what was to come. Berthoud went off in the second, two three pointers from standout point guard Sydney Leeper and another pair from beyond the arc from Rennaker and Annalise Carr were part of a 25-point quarter from the Lady Spartans. Berthoud’s defense was nothing short of outstanding as they pressed and frustrated Skyline, holding their hosts to just five points in the frame.

“We wanted mostly just to be aggressive and create our own energy and our own offense from our defense, that’s what we wanted to do tonight,” Gibson said. “I think especially in the second quarter, that run we had to end the second quarter was really the kind of basketball we want to play.”

Cavey, who sat for much of the second half with Berthoud comfortably ahead, scored 18 in the first half on her way to a game-high 22 points. The junior, who returned just a few weeks ago from a serious knee injury admitted that Berthoud used the heart-breaking, last-second loss to Windsor two nights prior as motivation.

“I think there was a bunch of built up adrenaline from the Windsor game and I think lot of us just really, really wanted that back. All of us knew we could have beaten Windsor … I think that anger kind of converted to tonight and all of us just used that anger and it helped us so much,” Cavey said. “I think as a team we passed around the ball a lot more and that helped keep us in the flow of things and just overall that was really helpful.”

Berthoud game-planned to keep stout Skyline juniors Ashayla Powers and Lindrey Schendel in check, playing full-court defense in an effort to prevent the pair from getting looks down low. The plan worked as Gibson intended as the two combined for only seven points in the first half.

“We needed to be aggressive and we couldn’t wait for them because they have those two outstanding post players so we said, ‘if you let them settle into a half-court game they’re really tough, they’re going to give you a lot of trouble,’” Gibson said. Skyline out-scored Berthoud 28-19 in the second half but Berthoud’s domination in the first 16 minutes of play was plenty enough to keep the game the Lady Spartans’ favor.

Berthoud will enter the postseason absent their leading scorer – sophomore guard Bre Fowler – who suffered a forearm injury in the loss to Windsor and is expected to miss time. Yet Gibson expressed unwavering confidence in his squad, pointing to the way the Lady Spartans performed when it was discovered that Cavey, an All-Conference and All-State honorable mention honoree last year, would miss a large portion of this season.

Said Gibson, “It’s definitely affected us and it’s going to affect us but it’s kind of like the situation we were in with Emily before where we can’t have one person make up for everything she does, we have to do it collectively and I think we’re doing that pretty well.”

In addition to Leeper, who took home All-Conference and All-State honorable mention honors last year, Berthoud will rely heavily on Rennaker, Ally Padilla, Addi Spears and freshman Carly Fischer to fill the void left by Fowler’s absence in the postseason.