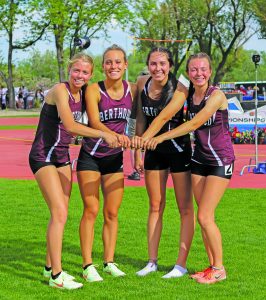 Photos by ACP Media – Berthoud’s 4×800 meter relay team of (left to right) Jaycee Williams, Olivia Krueger, Ally Padilla and Josie Diffendaffer pose with their baton after winning the 3A state championship for the second year in a row.

The Berthoud High School (BHS) track & field team had one of the best showings at the state meet in a very long time. The BHS girls 4×800 relay team won the state title for the second consecutive year and freshman standout Jayden Nohr took the top of the podium in the boys’ long jump.

In team results, the Berthoud girls team – who had qualified for state in every event except the pole vault, high jump and 100 meters – finished third place and the boys placed 11th in 3A competition. It was mission accomplished for Berthoud Head Coach Blaine Voth, who said he was hoping the girls would place among the top three teams, as they had last year.

The Lady Spartans 4×800 relay team entered the meet as the defending champions yet with one notable difference. This year, senior Josie Diffendaffer was racing on the team in place of sophomore sensation Paige Farnam, who missed the season after having surgery. Even with a new face, the results were the same.

Olivia Krueger led off giving the Spartans a large lead. She passed the baton to Josie Diffendaffer who lost a few seconds to The Classical Academy (TCA). Ally Padilla was passed by TCA after the baton exchange starting the third leg. Although she initially lost ground, Padilla did not let the TCA runner get far ahead. At the final exchange, TCA looked like they would dethrone the champs. Berthoud was three seconds behind when Jaycee Williams took the baton. Williams rapidly closed the gap, catching TCA’s anchor and passing her at around 200-meter mark on the first of her two laps and, by the time she crossed the finish line and heard the bell signaling the final lap, she held a comfortable lead that she maintained to lead to team to the repeat championship.

“I knew since they were in front, I had to needed to catch her as fast as I could so I did that and when I came around for the final 100, I said I feel good so just go for it,” Williams said of her two laps to win the title. “It’s amazing, especially since they’re three seniors and it’s my last year with them.” William’s split time in the race was 2:14.527, eight seconds faster than any leg of the TCA team. Williams’ leg gained over nine seconds – from a three second deficit to TCA to a six-second advantage – over her 800 meters on the track. Incredible.

Williams was back on the track on Saturday evening defending her 800-meter championship but had her work cut out for her against Basalt’s Katelyn Maley, last year’s runner-up. Williams’ strategy is to follow her competitors and then unleash an incredible kick. This time it would not be quite enough as Maley crossed the finish line just .21 seconds ahead; Williams earned the silver medal to bring home her second All-State honor of the weekend. 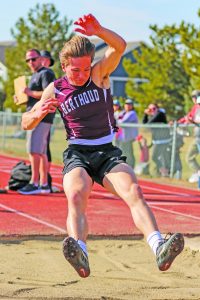 Photo by ACP Media – Berthoud freshman phenom Jayden Nohr brought home the gold medal for 3A long jump at the state track meet on Saturday. In addition to winning first in the long jump, Nohr also broke the BHS record in the triple jump.

Nohr, a freshman who burst onto the scene this year, qualifying for state in four events – long jump, triple jump and as part of the 4×200 and 4×400 relays. Prior to Thursday afternoon’s triple jump finals, Berthoud jumps coach Mil Santos gave him tips that he put into practice. Nohr jumped further each trial, until the final jump when reached 43’ 9.25”, to take fifth place and break the BHS record (43’ 6.5”) set in 2018 by Brock Voth, whom Santos also coached.

Nohr was not done. On Sunday in the long jump, the only athlete ranked ahead of Nohr failed to qualify to finals. Coach Santos told Nohr, “It’s wide open! Let’s see what you can do!” Nohr unleashed a 22’9” jump on his final run to win the state title to become the first individual male state champion from Berthoud in 27 years.

Thursday proved busy for Krueger as well. After winning gold in the 4×800, the senior who will run at Division One Kansas next year, was up again less than two hours later in the 3,200. She kept with the lead pack through most of the race. At the final 800, the eventual leader took off. Krueger continued to fight it out with six other girls for second place. Passing two runners in the final 200 meters, Krueger finished in fourth place, lowering her one-week-old school record to 11:14.68. Krueger also took 11th in the 1,600 and Williams finished in fifth.

Shortly afterward, senior Caden Leal-Midgett ran the 3,200. The UCCS signee had broken his foot three weeks earlier and had taken off his orthopedic boot to run in the state championships.

“This is my senior year and I’m not going to miss this experience, even though I haven’t run in three weeks,” stated Leal-Midgett, who finished 13th.

In the boys 1,600-meter, freshman standout Scott Clark and Tate Bothun toed the line for the metric mile. Bothun’s lingering illness caused him to fall back to 17th, but Clark capitalized on the excitement of the race and he ran 4:30.90, breaking Bothun’s week-old school record to take 11th place.

The 4×100 relay teams of Sydney Hardy, Addy Kirkpatrick, Maddie Kenner and Ellie Harper placed fifth in their heat and qualified for the finals where Hardy had an incredible start and Harper passed several teams in the final 50 meters in Sunday’s finals to place a very respectable sixth. Kirkpatrick finished her high school track career in style, finishing in fifth place to medal with a season-best 16’5” in the long jump.

Senior Anndee Davidson, who compete as a heptathlete for Fort Hays State, also qualified for state in four events. Davidson took medaled in three – taking seventh in the 300-meter hurdles and in the long jump, eighth in the 100-hurdles, clocking her career best time of 17:40 – and finished 12th in the triple jump.

Gracie Flores placed 12th in the shot put, Sydney Slauson placed ninth in the finals of the 400, Izabelle Froien placed 10th in the discus, just missing a state medal. Another star freshman, Jayden Michaelis, tried a new strategy in the 300 hurdles. He started quick and powered over the hurdles on the curve. When he came off of the curve, the freshman was in fourth place. He was challenged but found one more gear and held his position to bring home a medal.

The final event was the 4×400 relay where third place in the girls team competition was at stake. Berthoud was three points ahead of TCA; if they were going to stand on the podium, they would have to come out blazing. Slauson started the race, handing off the baton just one step behind Lutheran High. Williams took over and no one came close to the Spartans from then on. Diffendaffer ran her fastest 400 on the third leg and Krueger raced the ghost of time to finish in fifth and save their third place team finish.