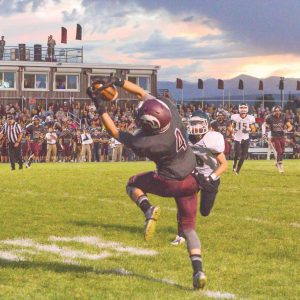 Wide receiver Chad Ellis makes an amazing catch during the first quarter of the homecoming game, Friday night, in front of the home crowd. Ellis finished the game with five catches for 48 yards. He also rushed five times for 27 yards and two touchdowns.
John Gardner / The Surveyor

Even though they faced the plethora of activities and distractions that come with homecoming week, a 49-minute weather delay in the second quarter, and committed 15 penalties for a whopping 170 yards, the Spartans still routed the visiting Niwot Cougars 42-6 Friday night at Max Marr Field in Berthoud. With the league win over Niwot, their first of the season, the Spartans now sit atop the Tri-Valley Conference (TVC) at 4-0 and have out-scored their opponents by a combined 179-6.

“I think anytime you have a 45-minute, hour-long lightning delay there in the middle, homecoming activities all week long and a lack of focus there, a 20-minute halftime, and then just all the penalties, it made a game that was 42 to nothing feel like it was six-nothing,” Berthoud Head Coach Troy Diffendaffer said after the game. “You fight through all the other stuff, and the homecoming stuff, and we got through that, and now we can set our sights on getting back to football.”

Despite the lop-sided final score in a game that got out of hand early, Berthoud held a 14-0 lead before the six-minute mark of the first quarter that was extended to 28-0 by halftime, Niwot fought valiantly for the full 48-minute affair. On the game’s final possession, the Cougars drove the length of the field against the Spartans’ reserves. The Berthoud coaching staff called timeout and put in the first team defense, yet it was not enough, as Niwot scored on a pass down the middle as the final seconds ticked off the clock. The late-game touchdown represented the first points allowed by Berthoud in the 2014 season.

“We’re playing great…I think it says a lot about our defense with how we were so mad over giving up that score,” said linebacker Jimmy Fate after the game. “That one hurt a little bit…it was bound to happen at some point so maybe it was good to get it out of our head and just focus on winning football games and not on keeping that zero on the board.”

Despite surrendering the late score, Berthoud’s defense was its usual dominant self throughout the game. Berthoud notched eight tackles for losses and forced six Niwot turnovers, including interceptions by Karsten Bump, Wyatt Woodrick, Jackson Hall and Jamie Gray, a fumble recovery by Michael Woodiel and one on downs. Both Fate and Diffendaffer attribute a lot of the defensive success through the first four games to the Spartans’ defensive line. The d-line, led by Ryan Markham, Ben Douglas and Steele Castles, is able to generate pressure on opposing quarterbacks and control gaps in the run game by themselves, allowing the linebackers and defensive backs to fly around the field making plays.

“It’s a great luxury to have,” said Diffendaffer about the defensive line’s role in the team’s dominance. “The scheme we’re running and the guys we have coaching those kids up have really been able to reach them and get their motor running.

“It all comes with good technique and with the skills they’ve been taught, coupled with their speed, we’ve seen some success.”

“Those guys are real work-horses up front,” Fate said of the d-line. “They keep those big offensive lineman off of me and Jamie (Gray) and everyone and that lets us linebackers flow and fill hard. I chalk up a lot of our success to our defensive line, honestly.”

With the defense forcing turnovers and preventing the Cougars from generating any momentum, the Berthoud offense, with its litany of weapons, struck early and often. Quarterback Cody Braesch shared the love, completing 20 passes to seven different players and finished the game with 303 yards passing, a pair of touchdowns and 101.4 passer rating.

Diffendaffer explained that part of Berthoud’s offensive game plan was to negate Niwot’s size advantage and maximize their own speed advantage by running a lot of side-to-side plays. Berthoud’s first two scores of the game came on the same play. Junior Chad Ellis was lined up off the ball and split wide left. He came in motion before the snap and took the handoff from Braesch, already running nearly full speed, and turned the corner off the right edge of the offensive line. All that was left was sprint to the end zone, twice in the first quarter.

Diffendaffer credited Offensive Coordinator Mike Drake and his staff for “calling a great game,” and making the most of Berthoud’s talent crop. Hall reeled in six passes for 135 yards, both season highs for the junior wideout, and scored his sixth touchdown of the season. Ellis contributed 101 all-purpose yards to go with his two scores.