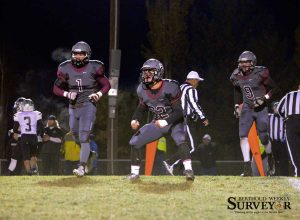 Berthoud defensive lineman Ben Douglas (62) celebrates a Roosevelt fumble that was recovered by Berthoud on the first drive of the game. The Spartans marched down the field and scored as a result.
John Gardner / The Sureyor

In a strange way, the final game of the year for the Berthoud High School football team was something of a microcosm of their season as a whole. Things started off very well, then the Spartans hit a rough patch, things improved for a little while before ultimately ending in disappointing fashion.

Playing at Max Marr Field at BHS on Nov. 6, Berthoud lost its final game of the season, 44-19, to Northern League champion Roosevelt. It was only the Spartans third loss of the season but was enough to keep them from making a return trip to the state playoffs.

While the final game and the season as a whole did not end the way the Spartans had envisioned, Head Coach Troy Diffendaffer was emphatic in expressing how proud he was of his team.

“We didn’t finish where we wanted to finish but we had a lot of kids battling through a lot of adversity this year, God Bless them,” an emotional Diffendaffer said following the loss to Roosevelt. “That’s all you want as a coach is for those young men to leave it all on the field and they did that today.”

It wasn’t that the Roughriders do anything terribly complex, they play a very basic style of ground-and-pound football, but they do it extraordinarily well. Diffendaffer and his team knew the challenge that laid in front of them and came prepared to face it; they just proved to be over-matched.

“Defensively, a lot of the stuff they run is A- and B-gap stuff, right up-the-middle kind of stuff, so we were pinching really hard there, trying to get them to bounce to the outside and have our safeties and our outside ‘backers kind of scrape and pick stuff up out there, but they were just a little quicker outside on us,” explained Diffendaffer. “At the end of the day, they’re a dang good football team and we didn’t match them.”

The ’Riders ran 50 offensive plays on the night, 49 of which were runs, gaining 382 yards and finding the end zone six times. Thirteen different Roosevelt players carried the ball on the night, with diminutive but lightning-fast senior Carlos Ortega leading the way with 11 carries, 101 yards and a pair of scores. 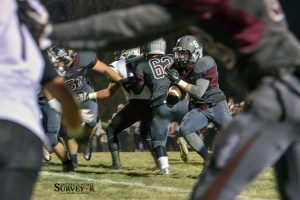 Berthoud running back Jimmy Fate (6) runs for Berthoud’s first score of the game versus Roosevelt in the first quarter on Nov. 6.
John Gardner / The Surveyor

The game started well for the Spartans as senior defensive end Steele Castles recovered a Roosevelt fumble at the Berthoud 10-yard line. The Spartans then assembled a 90-yard drive, proving they too could run the football effectively. Senior tailback Jimmy Fate converted three first downs on the drive and found the end zone on an eight-yard run to give Berthoud a 7-0 lead with 3:44 left on the first quarter. Fate finished the night with a season-high 101 yards on 21 carries and added another 19 yards on three receptions.

The Spartans were able to get on the board, twice in fact, in the fourth quarter. A 79-yard scoring drive that saw senior quarterback Cody Braesch connect with four different receivers — Max Bump, McCallan Castles, Chad Ellis and Jackson Hall — before pushing across the stripe for his team-high 10th rushing touchdown of the season.

On Berthoud’s final possession of the night, Braesch connected with Hall for an 80-yard catch and run that was the pair’s 12th scoring connection of the season, and 29th of their high school careers as quarterback and receiver. Hall called his, and the Spartans, final touchdown of the season “sobering” and said, “But no one was jumping up and down or super excited or anything, we took a second to realize it was one of our last moments, and it was a fun play, but we really got nothing out of it.”

Hall’s 995 receiving yards and 12 scores were the fourth-best mark in all of class 3A. The senior also had 487 yards as a kick and punt returner, tallied three interceptions as a cornerback on defense, and was the Spartans punter in his senior season.

“My dad always said that it’s not what you’re best at, it’s what your team needs you to be good at,” said Hall. “I was always willing to jump to a position where my team needed me.”

Braesch’s 2,268 passing yards and 19 passing touchdowns were the second-best mark in the Northern League. Defensively, Steele Castles finished with a league-high eight sacks and middle linebacker Jamie Gray finished with 106 total tackles, good for second in the Northern.

Losing to Roosevelt was not a shocking upset for the Spartans. The game, however, that players and coaches alike feel got away, was the 21-18 loss in week seven to Mead. “If we had beaten Mead things would have been different,” said Hall. “I’ll be honest, we wanted to be better than last year and it’s frustrating that we couldn’t because I think if we had gotten in the playoffs we could have beaten a lot of higher seeds, but we couldn’t get done what we needed to get done.”

While the football program loses a large number of seniors next year, the future appears bright as the Spartans’ C team was able to boast an undefeated season.

Correction: This story has been corrected from the print version that said Berthoud would be reclassified as 2A next year. According to the Colorado High School Athletic Association, Berthoud will remain in 3A for football.