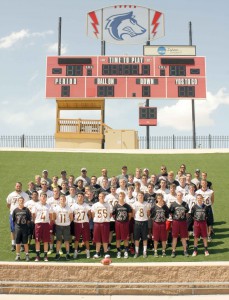 Berthoud High School’s football players pose for a photo at the Colorado State University Pueblo football camp on June 15. The program is designed to build team chemistry and relationships between the players going into football season.
Karen Fate/ The Surveyor

This past week the Berthoud High School Spartans football players and coaches traveled to Pueblo to participate in the Colorado State University (CSU) Pueblo ThunderWolves’ football camp. The Spartan’s ultimate mission is to return to the glory days that the program enjoyed 6-10 years ago that culminated in a state championship in 2007.

The old saying “you have to walk before you can run” is very fitting for the Berthoud football program. It has been five years since the Spartans have enjoyed a winning season.

“Our goal coming into this camp was to make improvements as a team and as individual players to help the team,” said head football coach Troy Diffendaffer. “We believe we accomplished that goal and, for the most part, we saw positive growth each session.”

The Spartans are overhauling the system by installing a new offense and defense, but that takes time and repetition.

During the first session, Thursday night, all the way through to the Sunday morning session, it was noticeable that the team and players gained a better grasp of the schemes on both sides of the ball; coming together and bonding as a team was just as important as the execution piece of the puzzle. Overnight camps like CSU Pueblo, where the players and coaches are together twenty four-seven, establishes cohesiveness and team chemistry.

“We are taking steps as a team and program toward our goal to return to glory,” said Diffendaffer. “The kids are starting to understand what we are trying to do. This past week was a positive step forward.”

Another aspect of the program is focus and discipline. No football team can experience success without those characteristics. CSU Pueblo Head Coach John Wristen shared the message with all of the teams on the importance of focus and discipline being the key to success when you’re tired and a little beat up late in a game. He went on to share that you don’t learn that on game nights, you have to live and breathe it in every aspect of your program.

“It’s important for our program, school and community, for our football players to have discipline in football and in their personal life,” Diffendaffer said. “Simple things like showing up on time shows the entire team you respect each player, and that evolves into each player knowing that their team has their back.”

On Saturday and Sunday you could see a bit more swagger by the Spartans as they realized that they can compete with the other teams at the camp, and you could sense that many felt that their teammates had their respective back.

The other participants of the camp were Prairie View High School, a 5A team that brought over 100 kids, 4A Greeley West, fellow 3A competitor Lutheran and 2A Brush High School.

Diffendaffer was very pointed in his determination to create an environment that produces fine young men as well as good athletes.

It is very early and the season is over 10 weeks away, but the team showed it can walk with some Spartan pride, and that may lead to running toward their goal of returning to glory.