Less than a year after Berthoud had formed its town government in 1888, the original Berthoud Fire Department, known then as Berthoud Hose No. 1, had organized itself as a collection of volunteers.

The first fire station was located in a two-story frame structure on Fourth Street, known then as the “hose house,” and was built for the sum total of $250 and also included the first Berthoud town hall building. 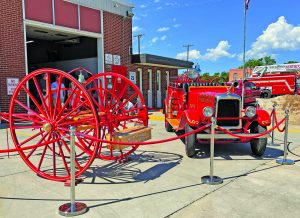 This being well before the era of large, motorized fire engines equipped with all the bells and whistles needed for extinguishing fires and rescuing endangered individuals, Berthoud Hose No. 1 used a wheeled cart equipped with a spooled 600-foot hose. A group of firefighters would pull the cart through the streets of early Berthoud, hopefully able to locate a hydrant with enough pressure to extinguish the flames.

The hose cart remained the mainstay of the Berthoud Hose Company until 1927 when the town board purchased a GMC truck and had Julius Pearse Fire Department Supply Company of Denver, Colo. equip the truck with a pump capable of delivering 350 gallons per minute, a chemical tank, electric siren, hose bed with 1,000 feet of hose and a fire body. Known as Engine 1, this vehicle served as the backbone of the Berthoud Hose Company.

In November 1950, a brick building a 330 Massachusetts Ave. became the new home for the Berthoud Fire District. Due to space constraints, the hose cart was stored outside behind the building and eventually fell into the hands of a gentleman named Ralph Craner in the early 1950s.

Craner and his brother-in-law, Pete Hahn, hauled the Hose Cart to piece of property Craner owned near Bailey, Colo. where it remained until its whereabouts were discovered in 1985 and, three years later, the original Hose Cart was displayed in the parade during the 1988 Berthoud centennial celebration.

Longtime Berthoud resident Jerry Ward, who served as the town’s first full-time, paid member of the Berthoud Fire Protection District, began enquiring about what happened to the Hose Cart in the early 1980s but was unable to successfully locate the hose cart and feared this piece of Berthoud history was lost forever.

After having returned the hose cart, which was in shambles with cracked wheels, peeling paint and rusty bolts and screws, a group retired firefighters, led by Ward and former Firefighter/Fire Investigator Lee Brian Scott decided in 2019 to form a 501-C3 nonprofit named Care Takers of Tradition to raise funds to restore the Hose Cart and Engine 1 to their original form.

Lee passed away and left funds for the group which spurred efforts to restore the 130-year old hose cart and 90-year old engine to their original condition. The restored vehicles were displayed in front of Berthoud Fire Protection District (BFPD) headquarters last Saturday at Berthoud Day and, that afternoon, the group held a ceremony in the Phil Pennock Training Facility and Public Meeting Room.

Scott’s widow, Christine, was present at the dedication ceremony whereby Ward presented her with a plaque in Scott’s honor that read, “In recognition of Firefighter/Fire Investigator Lee Brian Scott and his never-ending endeavor to preserve the history of the fire and rescue services in the Berthoud community, we, the Care Takers of Tradition hereby dedicate the restored 1988 firefighting Hose Cart in his honor.”