Berthoud family gets a place to call home 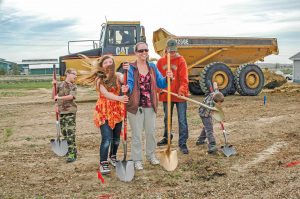 The Tatum family, from left, includes Kyle, 9, Trinity, 12, Stephanie and Mike, and Collin, 6, each pitches in and helps break ground at the site of their new Habitat for Humanity home in Berthoud earlier this month. The Tatums are the second family this year to receive a home through Habitat for Humanity program.
Becky Justice-Hemmann / The Surveyor

An unprecedented groundbreaking ceremony was held for two new Habitat for Humanity homes in Berthoud in April. For one of the recipients, the Tatum family, the event was a special anniversary gift, as they celebrated their fifth year of marriage the same weekend. After a long road of difficult circumstances, the family will finally rest easy knowing they have a place to call home.

High school sweethearts Mike and Stephanie Tatum reconnected nearly six years after high school in Iowa in 2007 and were eager to return to Northern Colorado where Stephanie grew up. Stephanie joined the military in 2011, but was discharged after suffering a hip injury. Since then, the family, like many others in the tough economic times, struggled to make ends meet.

Mike and Stephanie moved to Colorado Springs and signed a one-year lease with Mike’s brother. Yet when Mike’s brother and his wife found another home, the Tatum’s found themselves in an impossible situation and were unable to afford the lease.

“There was just no contingency for that,” said Stephanie, “It was a bad situation, but it led us to where we were meant to be. Now we are going to get a house.”

Mike struggled to find work in Colorado Springs, so the family of five decided to move to Berthoud in order to be close to where Stephanie grew up in Loveland.

“It really is perfect here in Berthoud,” said Stephanie.

The family moved to Berthoud in September 2013, only weeks before the flood. Mike had secured a job at Woodley’s in Longmont, but after the catastrophic events of the flood he discovered there was no job to return to.

“The whole shop was destroyed with water and mud,” said Mike.

Without any income the Tatum’s turned to Angel House, the House of Neighborly Service’s program for homeless families with children. Local churches and host families helped them eventually get into a transitional home which they were grateful to have.

“We are one of the lucky families who got moved into a transitional home,” said Stephanie. “We had talked in the past of connecting with Habitat. It was always there in the background. We had the idea but didn’t have the opportunity, financially. We know that owning a home is the smartest choice possible.”

Things began taking a positive turn for the family in recent months when Mike was hired to do maintenance on the old Hewlett Packard building in Loveland, which is now the Rocky Mountain Center for Innovation and Technology.

Another encouraging factor took place when the family discovered they had been awarded a FEMA grant due to the flood impact, which could aid in the construction of a home. These events gave the family hope for qualifying for a Habitat home.

Driving in their car one day, the family received a call from Karen Parks from Habitat for Humanity stating they would be one of the lucky recipients of a Habitat home. Despite the car windows being rolled down, and the surprised look of other drivers, the Tatum’s didn’t hold back their excitement as they all started screaming.

The tentative completion for the home is set for late August or early September. Stephanie describes the process as “a lesson in patience.” They can’t wait to start their new life and be able to have a place where their children can have their own space to decorate and also have the opportunity to own pets.

Having previous experience with several facets of construction, Mike can’t wait to be a part of the build and see their home constructed from the ground up. He is enthusiastic about the selected contractor for the job, Dusty Gray of Westco, knowing he is also a resident of Berthoud and has previously done exceptional work on other homes in the area.

One of the benefits of the new home for Stephanie will be the ability to add character and unique pieces through donations and refurbished items to make it their own space.

Mike is excited to celebrate his birthday, the first week of September, in their new home. This will also mark eight years to the month of when Mike and his wife Stephanie began their life together.

“It’s amazing that everything has led to this one pinnacle point,” said Stephanie.