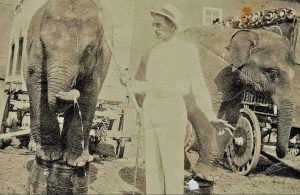 Photo courtesy of Pike-Hause Collection, Berthoud Historical Society – While visiting his mother in Lancaster, Mo., Dr. Will Duckworth posed for a photograph with a circus elephant. Duckworth began practicing dentistry in Berthoud in 1906 and used a tooth he had pulled from an elephant for a paperweight.

Over the years several dentists have practiced in Berthoud. Possibly the first was a Dr. A. Turnbull who, in 1898, commuted from Lafayette to Berthoud twice monthly to practice in a side room in the Bank of Berthoud. About that time Dr. Harry Ingalls pulled teeth in a room in his step-father’s home at 105 Mountain Ave. Later Ingalls moved into the medical office building that Dr. D.W. McCarty built at 338 Massachusetts Ave.

Four or five other dentists practiced in Berthoud before Dr. William A. Duckworth arrived from Missouri in 1906. Duckworth maintained an office at two Berthoud locations before he settled into quarters in the small brick building that still stands at 344 Mountain Ave. One unique feature of Duckworth’s office was an elephant’s tooth that was used for a desk paperweight.

Once after visiting his mother in Lancaster, Mo., Duckworth returned with a tooth he had extracted from the jaw of an elephant. The pachyderm that needed his attention was a circus animal William P. Hall kept at Lancaster. Hall based the “Elite Circus” of “Wm. P. Hall’s Magnificent Shows” in that Missouri town.

Early in Hall’s career he became a highly successful international businessman by providing mules and horses to businesses as well as American and British military forces. Hall furnished many horses used by the South African Light Horse Regiment during the Boer War, including a mount ridden by Lieutenant Winston Churchill.

In the early 1900s Hall applied his business savvy to the purchase of circus animals and equipment from small, failing circuses. In turn he leased them — especially elephants and circus wagons — to large circuses, including Ringling Brothers.  Hall dressed in fancy fashion and earned the nickname “Diamond Billy” for the diamonds he wore on his ties and shirt cuffs.

Duckworth began his dental practice in Berthoud in 1906. Sometime after that date he visited his mother who was living in Lancaster. While there he was enlisted to pull a tooth from an ailing pachyderm. He kept the specimen as a souvenir of his unusual exploit. The tooth made its way back to Berthoud where it served as an office oddity until he moved his practice to Loveland in 1916.

Diamond Billy Hall continued his work in Lancaster until his death there in 1932.

The descendants of Duckworth continue to cherish the elephant’s tooth that once sat on a desk in a dentist’s office in Berthoud. It has been a family heirloom for more than a century and will likely be one for a century more.