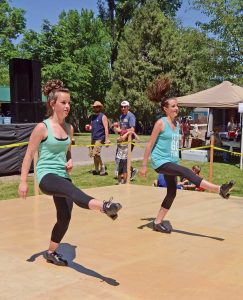 Taytlin Harrigfeld and RaeAnn Fooks competed in the Berthoud’s Got Talent competition.
Becky Justice-Hemmann / The Surveyor

Ten local legends-in-the-making took the main stage at Berthoud Day on Saturday, June 4, to battle it out in the inaugural Berthoud’s Got Talent competition.

The rising stars performed throughout the day, eliciting applause and the occasional “whoop” from the Berthoud Day crowd. Contestants included local songwriter Sandy Hamilton, who sang a compilation of his favorite original tunes including “Hey, Colorado;” and 14-year-old singer/pianist duo Juliet and Olivia who, after being added to the line-up at the last minute, took on Les Misérables’ “I Dreamed a Dream.”

Elementary-aged brothers Lennon and Brooks were a big hit with their performance of The Jungle Book’s “I Wanna Be Like You,” and a rendition of “Uptown Funk” that would make Bruno Mars proud.

This year, in response to community feedback, four finalists were selected by the audience, who was asked to vote by donating to their favorite performer’s tip jar at the front of the stage. The four with the most cash in their jars went on to perform for the judges at 7:15 p.m.

Out of the four finalists to move on, Moriarty-Moffitt School of Irish Dance took first place for their performances of “Champ Reel,” “Reel Around the Sun,” and audience favorite, “River Dance.” The group received a $100 cash prize. In second place, Jessica Johnson, community relations specialist at Poudre Valley REA, won $50 for her performance of Adele’s “Hello.” Third-place winners, sisters Jessica and Kelly Parish, won a bowling party at The Summit, and Ella North took fourth place for her performance of “Mama Mia.”