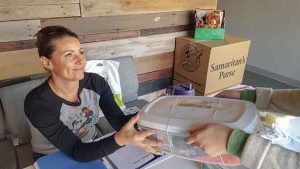 “We got involved years ago because of the respect and admiration we had for the commitment on the part of the Samaritan’s Purse ministry,” he said.

Since the 1970s the ministry has worked to provide international relief through programs like Operation Christmas Child, which collects and distributes shoeboxes containing everyday essential items, toys and school supplies to children affected by war, poverty, natural disaster, famine and disease around the world

In addition to the items purchased and packed by donors and volunteers, Samaritan’s Purse includes a copy of “The Greatest Journey” in each box. The book is written in the language of the child it will go to and explains who Jesus was, according to the Christian faith.

When Carlton came to Berthoud he brought Operation Christmas Child with him, inviting Calvary Church members to donate filled boxes to the cause, which the church then delivered to a relay center in Loveland.

This year Carlton said he inquired about making Calvary Church the official relay center for Berthoud, and received a positive response. He asked Lisa Adams, community outreach contact for the church, to take on the role of shoebox coordinator.

“I jumped at the chance,” said Adams. “This program is about children, and they have no choice about where they’re born, who their family is, or what class they are born into.”

Adams said she finds it heartbreaking and tragic there are kids in parts of the world without running water, shoes, medicine, or access to education, who have never even heard of Christmas.

“These are the most innocent little life forms, and that’s why I have to do this,” she said. Adams said she loves helping children through a program that is faith-based, and that’s about spreading the word of Christianity.

Adams and her team collected boxes at Calvary Church during national collection week, the third week in November. As a relay center, they took all boxes collected from Berthoud community members and delivered them to Timberline Church in Fort Collins. From there they will be sent to Denver, then to Tennessee, and then abroad to be delivered to children worldwide.

According to Adams, Berthoud collected 223 boxes in its first year as a relay center. Northern Colorado, as a whole, collected 18,912 boxes, a slight increase from last year.

While shoeboxes can be dropped off at any time, November’s distribution week, which falls just in time for the season of giving, is the largest push for the program each year. Shoeboxes that are delivered late will be saved for the next shipment.

“We feel confident in supporting this program, knowing that it’s all non-profit,” said Carlton. “Being able to see the live videos posted on the organization’s website, and seeing the impact this has on kids around the world, the scale of it is amazing. It’s a great thing to partner with.”

For more information on Samaritan’s Purse and Operation Christmas Child, including videos of children around the world receiving shoeboxes, visit www.samaritanspurse.org/what-we-do/operation-christmas-child/.