Tate and Trent Rees stood in front of friends, family members and fellow scouts at their Eagle Scout court of honor on Sunday, July 15. The court of honor was held at First United Methodist Church of Berthoud, the church they’ve attended their entire lives, in the town where they were born and raised.

Former Scoutmaster Ed Hursey presented the boys, both of whom have been in the Berthoud scouting program since first grade, with badges and patches to officially recognize them as Eagle Scouts. 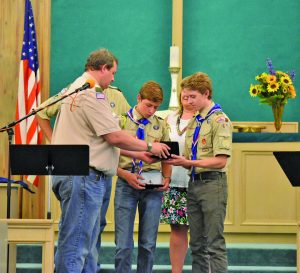 Photo by Katie Harris – Trent (center) and Tate Rees (right) were presented their Eagle Scout badges by their former Scoutmaster, Ed Hursey. Parents Scott and Tammy looked on with pride.

The boys then pinned their mother, Tammy Rees, with a mother’s pin as she teared up with pride. They presented their father, Scott Rees, with a tie tack. The brothers also presented mentor pins to those who have helped them along the way. Tate gave his pin to Hursey, while Trent gave his to his 20-year-old brother, Logan Rees, who’s also an Eagle Scout.

Hursey then said a few words about the boys before the dozens of guests in attendance enjoyed a slide show honoring the brothers’ many years in scouts.

“They took anyone under their wing, never judged or bullied anyone,” said Hursey. “They were very inclusive and never acted better than another scout. They were always willing to teach and train. To me that’s more what scouts is about than a given rank or skill that they learn. Those are the qualities that turn them into leaders and respectful young men.”

There was a time when 18-year-old Tate Rees wanted to give up. Having spent years on his Eagle Scout project only to have it scrapped at the last minute, and inching closer and closer to his 18th birthday when he would age out of scouts all together, he was seriously contemplating leaving scouts behind.

“Back in eighth grade I had planned to make a nature trail by our house in an area where people already liked to walk,” said Tate. “I had done all the planning and was all set to get started when it ended up being done by Berthoud Parks and Recreation right before I could do it. I was getting so close and it was so frustrating having done all that work just to have it be a waste, I was actually considering being done with scouts after that.”

Hursey said he was sure Tate would quit at that point. “I really thought he was going to give up and decide it wasn’t worth it.”

But Tate didn’t give up. Instead, when Emily Hagan, senior pastor at Berthoud’s First United Methodist Church mentioned a need for new cabinets in the church’s youth room, the long-time scout readily agreed, knowing he’d have to pick up the pace this time around.

“Since my birthday was coming up and I was going to age out, I had under a year to do the whole thing,” said Tate. “I ended up getting it done in about four to five months, including planning and going to committees. We found a plan online and adjusted it to make it work in the space we had upstairs. As far as building, I got it done in about a week.”

The cabinets now hold supplies for the youth room, as well as towels and toiletries to accompany a new shower that was recently installed for missionary groups that stay at the church.

“We’ve put the cabinets to really good use,” said long-time church member Leanna Konechne. “We just had several students and their professor stay here while they were volunteering at Habitat for Humanity, and it’s been such a nice addition to store towels and supplies in for them. It was important to keep the place looking nice and to keep things handy for these students.”

In his scoutmaster speech during the Rees brothers’ Eagle Scout court of honor, Hursey received a chuckle from the audience as he pointed out how rare it is for a scout to achieve his Eagle rank early, joking that scouts are notorious for waiting until the last possible minute before aging out to complete their projects.

That wasn’t the case for Trent Rees, though. The youngest of three brothers, and the third to achieve his Eagle Scout rank, Trent approached Pastor Hagan shortly after his brother Tate received his project assignment, eager to tackle a project of his own.

Hagan mentioned an area west of the church parking lot needed a clean-up, and the person who was originally going to do it had backed out. That opened the door to what would become Trent’s Eagle project.

“I cleaned up the area, pulled weeds and built a bench for people to sit on,” said Trent. “In total my project took about 80 hours over the course of two years. Once the planning was done and I was ready to start working on it, it went pretty quickly. I found a plan online for a wooden bench and changed it to how we wanted it to look.”

Now completed and in place, the bench has been well received by the congregation.

“The wooden bench outside the church, built on the edge of the street, signifies the warm welcome waiting for anyone who comes inside the church,” said Konechne. “It gives people walking by a nice place to sit and meet and talk.”

Trent has been pleased to receive early feedback that the bench is being put to good use.

“Sometimes people come up and tell me, ‘Hey, I saw someone out sitting on your bench last night,’” said Trent. “It’s nice to hear people are getting to use it.”

For Tammy and Scott Rees, having all three of their sons achieve Eagle Scout rank is truly something to be proud of. In fact, according to Hursey, only four to six percent of scouts complete the requirements for Eagle.

“Very, very few scouts make it to Eagle,” he said. “What this tells us is that Eagle Scouts have great perseverance. These boys have pushed through and accomplished something very difficult, and that’s worth something.”

Trent has one more year of high school to go before he plans to either attend a four-year college, join the military, or perhaps both. Tate has been accepted to University of Colorado in Boulder for the upcoming school semester and will be pursuing a degree in applied math. He’s considering applying for the five year master’s program in engineering down the road.

As they move forward into life after high school, Hursey believes the Rees brothers’ scouting experience will help prepare them for whatever lies ahead.

“A lot of people say, ‘Well it will help you get a job,’” said Hursey. “For me, it’s helping you be good at whatever job you’re going to do. They’ll be able to push through those hard times or take people under their wing and lead to get things done, no matter what they do.”