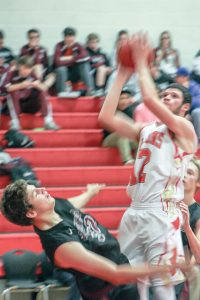 Berthoud’s Noah Purdy gets fouled during the game against Skyline on Jan. 8 in
Longmont. The Spartans narrowly lost the game 45-42.
Angie Purdy / The Surveyor

Losses are always painful for a team. But losses that could not, and probably should not, have been losses are the most painful. In their last two games, the Berthoud High School (BHS) boys basketball team let a lead slip away in the game’s final minutes, snatching defeat from the jaws of victory.

Playing in Longmont against Skyline on Jan. 8, Berthoud allowed the Falcons to score 20 points in the fourth period, erasing the six-point lead with which the Spartans began the final frame. Berthoud was out-scored by eight in the fourth, ultimately losing by a 45-42 final.

A similar sequence repeated itself on Jan. 12 in the BHS gym. The final eight minutes began with the hometown Spartans holding on to a slim four-point lead, 46-42, one they would expand to as much as seven. Yet, some unforced turnovers and defensive lapses by Berthoud, coupled with some clutch play by Roosevelt saw the visiting Roughriders take the lead and ultimately win the game 64-62.

“Same thing, different game; they get themselves into positions to win, they’re just too scared to go after it,” an understandably frustrated Berthoud Head Coach Mike Burkett said after the loss to Roosevelt.

Just past the mid-way point of the fourth quarter, Berthoud’s Dylan Adaza attacked the basket and made a lay-up, putting the Spartans up 54-47. After a quick score by Roosevelt, Wyatt Stratmeyer made good on a pair of free-throws to put Berthoud back ahead by seven, 56-49, with 3:29 left on the clock.

It was then that things began to unravel for Berthoud. Turnovers on back-to-back possessions were quickly turned into four points by the visiting ‘Riders. Two possessions later an and-one from senior Jared Chick put Roosevelt ahead 58-56 at the 2:18 mark.

After taking the lead the ‘Riders became relentless on both ends of the floor. Nick Wall drove the lane and made a lay-up to put Roosevelt ahead three, 60-57, with just under two minutes remaining. After a Berthoud foul, DeAunte Hunt swished both of his free-throw attempts to extend the ‘Riders lead to four, 62-58.

Despite four minutes of basketball that went anything but their way, the Spartans did not give up. Adaza made a layup and sophomore standout McCallan Castles made good on a pair from the charity stripe, the final two of his 15 points on the night, to cut Roosevelt’s lead to just one, 63-62. Hunt made one of his two free-throws on Roosevelt’s final possession but Berthoud’s last-second attempt to win the game ended without a shot attempt as a miscommunication resulted in the ball being thrown out of bounds, allowing Roosevelt to hold on for the two-point victory.

The Spartans frustration with the way the game ended is understandable. In several games earlier in the season Berthoud struggled out of the starting gates but then made furious attempts at come-backs that each time fell just short. In the last two games the Spartans played well throughout the game only to give it away late.

“I still think some of my guys think the other team, whoever it is, is better than us,” Burkett said. “That’s how you blow back-to-back games where you have seven, eight-point leads with less than four minutes to go.”

Maddening as the final four minutes of the game were from Berthoud’s perspective, Roosevelt found ways throughout the game to hang on. Senior Orlondo Rivera kept his team in the game in the first half, draining four from downtown, part of his game-high 18 points, which helped prevent Berthoud from building an insurmountable lead.

The Spartans, likewise, had opportunities to build bigger leads but hot streaks turned cold. Junior Noah Purdy, one of the few players on the Berthoud squad who saw substantial playing time on varsity last season, scored six points at the end of the first period. Coupled with a trey from senior Patrick Barron, who recently returned to the lineup after missing time with an ankle injury, Purdy’s six points gave Berthoud a 19-15 lead after one.

Bizarrely, Purdy did not see much playing time after his first period scoring frenzy. And Barron, who scored eight of Berthoud’s 11 points in the third quarter, was held without a shot attempt in the fourth. Adaza, who has been Berthoud’s second-leading scorer throughout the season, did not make his first field goal until the layup just after the midway point of the fourth quarter.

The road for Berthoud (4-8, 1-2 conf.) will not get any easier over the next week. The Spartans welcome always tough Windsor (6-4, 1-0 conf.) to the BHS gym on Jan. 15 before taking a three-game road trip to TVC foes Frederick, Holy Family and Mead.