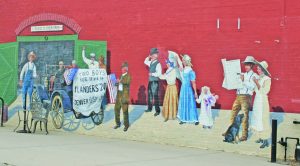 The mural on the Berthoud Athletic Club building at 247 Mountain Ave. was painted in 1999. The work of Fort Collins based artist Susan Dailey, the over-sized painting was an installment of the “Paint the Town” project initiated by the Berthoud Arts & Humanities Alliance (BAHA). The multi-phase project culminated in the painting of the enormous mural on the local grain elevator in 2005.

The “Floyd Clymer” mural on the Berthoud Athletic Club building blankets an 18’x40’ section of the eastern exterior wall of structure. The mural takes its inspiration from a photo postcard taken in front of the Foresman & McCarty drugstore on Third Street in June 1910. Along with the “Homesteaders” mural on the façade of the Little Thompson Valley Pioneer Museum, it is a striking feature of the East Mountain Avenue gateway into the town of Berthoud.

The story depicted on the mural dates to the spring of 1910 when Dr. Joseph B. Clymer closed his Berthoud practice to relocate in Walla Walla, Wash. With Clymer’s permission his sons, Floyd (age 14) and Elmer (age 11), led the family migration by attempting to pilot a Flanders “20” automobile from Denver, Colo., to Spokane, Wash. Clymer, his wife, and their daughter Polly were scheduled to travel by train to their new home later.

The boys’ youth and roads that were little more than wagon ruts brought their journey to an abrupt end in western Wyoming.

Many years later, in 1944, Clymer later recalled in the first volume of “Floyd Clymer’s Historical Motor Scrapbook,” “I was then fourteen years old and my brother, Elmer, was eleven. We got an idea! Why not drive a Flanders “20”—just the two of us—from Colorado to Washington?

“First night we stopped at Berthoud our home town in Northern Colorado. The next day on to Cheyenne, Wyoming. Newspaper men met us—we went to the State Capitol for photos with the governor. Next day we headed West over the Continental Divide. In those days there were no roads—as we know them now—just winding trails, through sand and sagebrush. We carried wide strips of canvas sewed together, 100 feet long. The sand was so deep in places that those strips had to be placed down for the car to run on. The rear end would jump up and down. One day we made seven miles—slept on the prairie that night and we were two scared kids—coyotes howled and prairie dogs, though harmless, were everywhere. Now and then a cowboy would ride by and greet us the next day, or we would meet a sheepherder with his wagon. We had a few good meals with the sheep men. Water was a problem. We could not carry enough at times to keep the Flanders satisfied—even with two 5-gallon cans and three water bags.

“Our progress was slow. Then near Fort Steele, Wyoming, the rear end went out—the sand was just too deep. We stayed there until the factory sent a mechanic out with a new rear end. We lost six days. He replaced the rear end in the open air, on a flag station platform. He checked the motor and we started again. By this time our hopes of ever reaching Washington were about shattered, as the car still jumped up and down when we got in the deep sand. Cowboys helped us—covered wagon drivers towed us at times. We kept at it—but finally in western Wyoming, after another transmission failure, we gave up the ghost. Reports were that roads we had passed over were far better than those ahead. We were even reported “missing” and as having died in the desert when we left the car to walk to the nearest town for help when the rear end left us the second time. We shipped the car back to Denver and went to Washington by train.”

The entire Clymer family eventually made it to Washington but soon after returned to Colorado. In his adulthood Floyd Clymer became the leading publisher of automotive literature in the United States.

The Floyd Clymer mural on the Berthoud Athletic Club building on East Mountain Avenue has an important double legacy. Not only does it record Berthoud’s Clymer brothers’ bold attempt to motor across the West in 1910, but also BAHA’s “painting of the town” in the late 1990s and early 2000s.