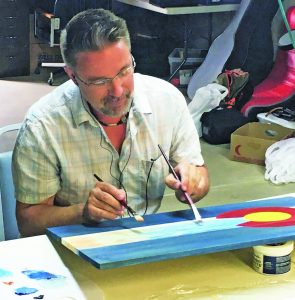 Courtesy photo – Berthoud artist Michael Magee painting one of his Colorado flag paintings. Magee’s work will be on display at De Bean coffee shop through the month of January. 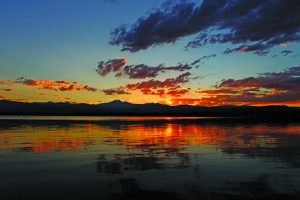 Photo by Michael Magee – Sunset over Lake McIntosh in Loveland.

By Shelley Widhalm
The Surveyor
Berthoud artist Michael Magee likes to paint with both hands — he uses two different brushes with two different colors to work on two different details at the same time.
“Trying to get the contrast and lines and details at the same time with both hands, that takes a lot,” Magee said. “With the technique and subjects matters, it helps speed up the process of completing the painting. I can get it done in half the time.”
Magee will have a few of his paintings and photographs on display in January 2018 at Da Bean Coffee House, where Northern Colorado artists display their art every month on a rotating basis.
Magee discovered his ambidextrous talent about two years ago — but he knew he wanted to be an artist since elementary school. He went into the corporate world first, before taking on a full-time career as an artist about the same time he discovered his ability to paint with both hands.
“I realized I’m an artist and a photographer. I need to embrace it and accept it and do it more as a living than a hobby,” Magee said.
Magee grew up, in part, in Berthoud and graduated from Berthoud High School in 1988. He attended a year of college, majoring in art and psychology, but quit to jump into the corporate world, where he worked for more than 25 years. He managed a call center and worked in sales, management and customer service.
In August 2016, Magee, who now winters in Arizona, had back surgery and, in his recovery, had two options: read or do art, he said. He painted images of Colorado flags, which he showed on Facebook, generating interest and selling several, starting that same month.
Magee has been painting and doing photography as a hobby for about five to seven years, selling a few pieces, but with the flags became more serious about his work. He created a business name about four to five years ago, Sundara Images, using the Sanskrit word for “essence of beauty,” combined with his images of paintings and photographs.
“What I capture and recreate is beauty,” Magee said.
Magee, who is an introvert by nature, finds painting to be a way he can express himself while engaging in nonverbal communication and connecting with others. He likes to work in oil and acrylic and mainly creates realistic images of landscapes, though he dabbles in other forms of art, like drawing, stained glass, mosaic and jewelry. He photographs landscapes, nature and architecture, using a digital camera but does not alter anything, and he does custom pieces.
“When people see an image of Michael Magee, this is the captured moment that’s unaltered,” Magee said. “Photography for me is kind of sacred. I’m out in nature connecting with nature. … I’m so focused on capturing the moment or image, it’s almost like meditation.”
Most of Magee’s photographs are taken on his hikes —he’s an outdoor enthusiast — and during his travels, mainly in Colorado, California and Arizona. He incorporates his finds in his Colorado flag paintings, such as an aspen leaf in place of the flag’s yellow dot and the images from some of his photographs onto the white stripe of the flag.
“My technique, with the Colorado flags especially, is I do photo realism. I take photographs to make the painting look like the photographs,” Magee said.
Magee is often asked how he preserves the aspen leaf for his flags.
“That’s cut out of wood and painted freehand. It goes back to my intention of making it as real as possible,” he said.
Magee will have four of the painted Colorado flags on display at Da Bean, along with a larger wooden flag depicting the sunrise over a cornfield in Milliken. He also will have four landscape photographs of places like Lake McIntosh in Longmont, Emerald Lake in Rocky Mountain National Park, Chautauqua Park in Boulder, and the Maroon Bells near Aspen.
“What he does is he takes the Colorado flag and he adds some silhouettes of important areas of Berthoud around them. He puts more of a local feel to everything,” said Jennifer Harris, owner of the Da Bean. “When you put his stuff up on the wall, it’s stuff you know that’s around town. He has a creative twist to a lot of his things. He uses different colors where it pops out a little more.”
Magee has shown his work at Da Bean two other times, at a medical clinic in Longmont, where he was the featured artist in May, and at Indigo Sky Trading Co. in Berthoud, for more than three years.
“He has the natural talent to be able to paint everything and anything,” said Magee’s twin sister, Veronica Rogge of Milliken. “Knowing it looks exactly what it would be out there is the thing I like best about it. … It’s been fun to see where he started and where he’s going.”