There has not been such a warm and dry early winter since 1885. The year 1885 was 136 years ago and the fledgling burg of Berthoud was barely one year removed from its original site on the Little Thompson river bottom. 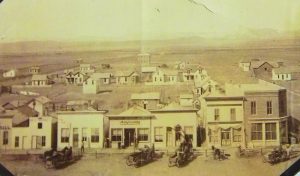 Photo courtesy of Berthoud Historical Society – The first known photograph of Berthoud is a view of the town taken in 1887 or 1888. During that era Northern Colorado was in the midst of a warm and dry weather pattern similar to that of today.

By 1885 the majority of ranchers who grazed their horses and cattle on the open range of the Little Thompson Valley had moved north, making room for farmers who were in the process of staking homestead claims on land “under” the Handy Ditch.  The “Handy” brought irrigation water to the valley’s farms from the Big Thompson River during the spring run-off. In 1885 most of the reservoirs in which to store Handy water for use during the summer had yet to be built.

In 1885 the town of Berthoud boasted perhaps a few dozen hardy residents who lived in a handful of dwellings and business houses that straddled the tracks of the Colorado Central Railroad. The weather had been warm and dry for a few winter seasons and was a boon to the first residents of the community as they graded streets, erected houses and stores, and started a town that in a few decades would grow into the bustling commercial center of southern Larimer County.

Berthoud did not have its own newspaper in 1885 so tabloids from neighboring communities—the Fort Collins Courier, the Loveland Reporter—were the source of news for people living in the Berthoud area. Each of these newspapers employed correspondents who supplied newsworthy items for publication in short columns about Berthoud.

In one of these columns published on April 16, 1885, the Fort Collins Courier noted, “Berthoud, about one year old, has two general stores, one grocery store, one drug store, two blacksmith shops, one shoemaker, one hardware store, a temperance [alcohol free] saloon, a barber shop, a church organization, and will soon have an elevator. The dwellings number about a dozen.”

Later in April the Fort Collins newspaper happily announced, “The storm of last Monday just filled a long felt want. It has already had the effect to lengthen the grain and shorten the fences of the ranchmen.” A week later the tabloid which was based at the Larimer County seat added, “The amount of rainfall in the storms last week reached two and two-thirds inches.”

The newspaper also reported that local farmers were sowing more wheat than oats or barley and were considering the possibility of planting tobacco since a thimbleful of seed would supply plants for more than an acre.

In 1885 the handful of school-aged children living in the town of Berthoud walked north two miles to attend the Mars Hill country school (no longer standing). That year town residents also heralded the need for a municipal waterworks since water for domestic use was being brought to town in wooden casks filled from the Little Thompson River.

Along with the dry and warm early winter weather, residents of the Berthoud area contended with epidemics of whooping cough, typhoid fever and diphtheria in 1885. The community was also afflicted with peddlers who hawked suit and dress patterns, patent rights, and lightning rods.

In 1885 the tiny burg of Berthoud experienced a warm and dry spell not unlike 2021.