As a custom woodworker, Berthoud area resident John Goreski has a thing for trees. 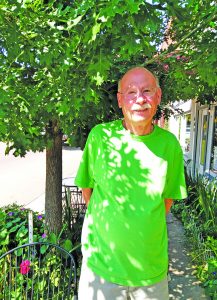 John Goreski, who stepped down in August from the Town of Berthoud’s Tree Advisory Committee after 26 years of service, stands in front of an oak tree on Mountain Avenue. The tree, which is part of the town’s Main Street project to plant 22 trees along the street in 2009, replaced an elm damaged during the town’s curb-and-gutter construction work.

Goreski’s appreciation doesn’t stop with his work that also includes a college job of planting trees and professional work building custom homes. Since 1991 he has served on the Town of Berthoud’s Tree Advisory Committee, helping bolster the tree’s inventory.

“Everybody has their little thing, and my thing happens to be trees,” said Goreski, chairman of the committee for the past 17 years and a Berthoud resident since 1981. “Some of us are coaches and some of us are volunteers for different organizations around town, and that was my niche.”

In August Goreski stepped down from the Tree Advisory Committee after 26 years of service overseeing the planting of trees during Arbor Day events and other projects. He helped make recommendations about the rules and regulations for the purchase, planting, care and removal of trees and other greenery in the town’s public areas. And he helped manage the town’s Tree City USA standing.

“I just think it’s time. It’s time for somebody to have a voice,” Goreski said.

Goreski joined the Tree Advisory Committee before his service as a town trustee for one term from 1992 to 1996.

“It felt right to continue to be involved in the town in some way,” Goreski said.

Goreski, a Denver native, earned a degree in environmental design in 1974 and worked as a laborer building custom homes, then became a custom woodworker, owning a business and doing commercial work. During college he worked with a landscape contractor in the summer months on tree plantings for commercial and residential areas.

“They’re an important part of our urban life,” Goreski said. “If there weren’t trees, life would totally be different.”

In 1983 the town earned its first Tree City USA award for having that board and meeting three other requirements, including proclaiming and passing a tree-care ordinance, organizing annual Arbor Day celebrations, and investing at least $2 per capita in tree-related projects. The Arbor Day celebrations, along with other projects the board organized, resulted in the planting of more than 250 trees within town limits and 22 trees along Mountain Avenue as part of the town’s Main Street America project in 2009. The focus of the various plantings, many funded through state and federal grants, is on preservation-based economic development and community revitalization.

“When we planted these trees up and down Main Street, that was a big accomplishment,” Goreski said. “We were asked to create a green space.”

In 2011 the town board passed a resolution defining the responsibilities for board and advisory committees, and that changed the name of the tree board to the Berthoud Tree Advisory Committee.

The main role of the Tree Advisory Committee, which has seven members that serve three-year terms, is to promote the care of the town’s public trees in open space areas, town parks and street rights-of-way, which represent the space between the street and the sidewalk, or the tree lawn. The board conducts tree inventories, hosts community workshops, and stays abreast of current issues.

The town has 3,500 public trees, 30 percent of which are ash, a type of tree potentially under threat of the emerald ash borer. The nonnative invasive species of beetle, originally from Asia, is believed to be in 30 states, including Colorado, though not in Berthoud. The town is focusing on planting trees in areas with a high number of ash trees, with many of them in Fickel Park.

“We want to manage the replacement of trees. We don’t want to lose them all at once,” Goreski said.

Currently, the Tree Advisory Committee is working on updating the town’s Community Forest Management Plan, which outlines the management of the town’s urban forest and includes a statistical analysis from the tree inventory that includes ash, elm, oak, catalpa and locust. Goreski plans to work with the tree board on the plan until the end of the year. He and the committee also assisted with the emerald ash bore management plan, passed by the town board in February.

“Typically, 15 percent of the urban forest is ash trees. We’re unique in the fact we have 30 percent,” Goreski said.

Originally, the tree board was established to deal with Dutch elm disease and now is preparing for the potential arrival of the emerald ash borer.

“We’re in good shape,” Goreski said. “We have the support of the town board and the Forestry and Parks and Recreation departments. … I like just being able to look around and see the trees we planted, the difference we made.”

Goreski also is a member of the Berthoud Historical Society and has helped with several projects, including building the Bunyan Observatory, a stage, an arbor, and an enclosure for a school bell that are located at the Little Thompson Valley Pioneer Museum in Berthoud. His home, the Jensen House, has been on the Historic Homes and Gardens Tour put on by the historical society.

“I’m trying to step away from some things and have more time to spend at home and work on projects at my place,” said Goreski, who gardens and enjoys yard work. “I might spend more time at the Berthoud Historical Society, helping out there.”

Mark French, president of the Berthoud Historical Society, finds it difficult to list all of the things Goreski has done for the nonprofit.

“He’s built several of the features in our Pioneer Courtyard. That’s one of the reasons we have such high quality structures out there,” French said. “He’s a long-term dedicated volunteer. He really does it for the benefit of community.”

Berthoud is proud of its trees, and Goreski also has contributed to that, French said.

“The trees are an important part of our heritage,” he said. “We have a wonderful inventory of trees, so we not only appreciate his work doing that, but he’s been a wonderful volunteer for the historical society as well.”