Berthoud area resident Susan Puckett wants to return to Kenya after a whirlwind trip of helping schoolchildren and adults with their medical care. 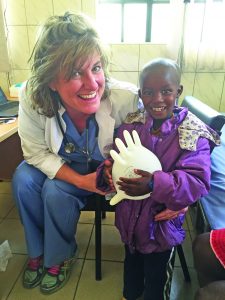 Susan Puckett, who volunteered as a physician’s assistant in Kenya in October 2015. treats a child with chronic ear infections, through a medical mission trip of the We Charities’ Passion to Heal Initiative.

Puckett’s volunteer work as a physician’s assistant is part of a one-time opportunity for Americans and Canadians to travel to Kenya and India through We Charities, a worldwide charity and youth empowerment movement based in Toronto, Canada.

Puckett and another 19 health-care practitioners spent nearly two weeks in October 2015, volunteering with Passion to Heal, an arm of Me to We. Me to We, a social enterprise based in Toronto, supports the We Charities trips and encourages people to make consumer choices that give back worldwide.

“It gave me such a better understanding of another culture’s challenges and made me appreciate everything that’s available to us here, but it makes me want to go back,” Puckett said.

Puckett, a physician’s assistant for 25 years at the Boulder Medical Center, learned from a friend about the Passion to Heal medical volunteer trip. The trip, financed by Quebec-based Valeant Pharmaceuticals, is unlike other medical trips where the volunteers have to raise the money for travel and lodging.

“I wish more pharmaceutical companies would do this type of work where they would pay for people to go over and do medical care instead of bringing us lunch in the office,” Puckett said.

The health-care team ran a clinic for 10 days at the Baraka Health Centre, previously built by the We organization in the bush, with the closest town an hour bus ride away in Narok, Kenya.

“I was really surprised how modern it was, considering we were in the middle of nowhere,” Puckett said.

The team consisted of health-care practitioners from the United States and Canada and included doctors, nurses, nurse practitioners, physician’s assistants and medical assistants, five of whom were from Boulder Medical Center.

Kim Guthke, a physician’s assistant from the Medical Center and a Boulder resident, liked the idea of bringing medicine to those who do not have the money or resources to get the help they need.

“They’re very welcoming and grateful and have a great need for medicine,” said Guthke, who went on the trip with Puckett. “You always feel like you never do enough.”

The team members filled extra suitcases for the trip, bringing medical supplies, medications such as antibiotics and antifungals, and products for wound care.

“Literally people line up outside to be seen. It’s pretty incredible,” Puckett said. 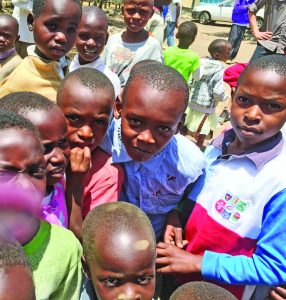 School children living in Kenya line up to be treated for parasites in October 2015 by medical personnel who volunteered their time through the We charities Passion to Heal initiative, which funds the cost of medical volunteer trips to Kenya and India.

The team ran the clinic in the mornings, seeing hundreds of patients over the course of the visit. The team tried to use electronic medical records but found the system to be inefficient since the residents did not know their birthdates and often did not know how to spell their names, or they would have multiple charts from other visits. They also did not have documentation like passports or Social Security cards, Puckett said.

“It was very difficult to know if we had the right person,” Puckett said. “They put Jan.1 as their birthday.”

The clinic operated like a typical clinic with a pharmacy and laboratory but did not have an x-ray area. The team separated into clinical rooms to see patients for skin conditions, but the patients brought in other complaints the members also tried to address, Puckett said.

“You end up seeing a lot of everything,” Puckett said.

In the afternoon the team went by bus to rotate among five different schools where they saw thousands of children, Puckett said. The girls could attend school in communities that had water wells, since their job was to carry water on a daily basis for their families’ use. Most of the children had to walk miles to get to school, considering it a “privilege” to go, she said. “These kids would mob us at the bus. They would line up,” she continued.

The team gave each child anti-worm medication and examined their skin for various skin diseases.

The team members worked on other projects during the trip, including pouring concrete for a nearby hospital under construction. They took a trip to the market in Narok, similar to an open flea market. And they went on a water walk, where they hiked approximately one kilometer to the river with empty five-gallon jugs to fill with water and carry back on their heads.

“They wanted us to experience — not only to help people — but what their lives are like,” Puckett said.

The team worked with Maasai warriors, native to Kenya and East Africa, who served as their host guides and translators, translating from Swahili and other spoken languages to English. The warriors, adorned in brightly colored tartan robes, originally had to kill a lion with a spear to earn their ranking but because of conservation efforts now have to earn a bachelor’s degree.

“These native tribes are trying to maintain the integrity of the ecosystem. They don’t want to kill all the lions,” Puckett said, explaining the warriors engaged in ceremonial cutting and other practices. “They tried to enlighten us about why they do certain things. To them, that’s how they toughen themselves to be able to withstand pain. They’re pretty hardy people.” 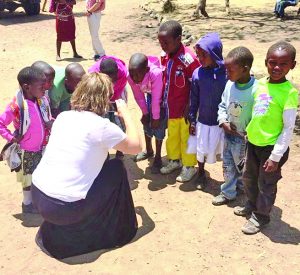 Susan Puckett shows her camera to Kenyan children, who are fascinated with it during a medical mission trip.

The Maasai took the team on a 30-minute nature walk each morning, pointing out the wildlife and explaining aspects of their culture.

“It was an interesting way to start your day, and then you’d go have breakfast,” Puckett said. “Then we would get on an open-air bus, and they would take us to the clinic.”

The team ate lunch, went to the schools and had a buffet-style dinner in the evenings, sitting around a campfire to learn more about the Kenyan culture.

“It was probably the most enlightening trip I have ever had,” Puckett said. “There is this whole other world out there. It was such a life experience for me to be exposed to that.”

Puckett added she would return to the mission if she could.

“I’d go back and do it for months,” she said. “I love what they do. There was something about that; we felt like we really were helping. … It’s a real recharge for my life. I came back enthusiastic.”