The Berthoud Area Chamber of Commerce held its annual membership celebration and installation dinner Jan. 27 at Grace Place. The event included a silent auction and the winners of the business of the year, citizen of the year and Doctors Fickel Award recipients were announced.

Business of the year was awarded to DaBean Coffee Shop, 434 Mountain Ave. According to the Berthoud chamber website, one individual who nominated the business did so because, “…Jennifer Harris hires community youth to work at her business. I nominate her for Business of the Year. She trains them to do all kinds of different skills which they’ll be able to use in their future endeavors, and she does it with patience and love. She truly adds something special to this community.” The other business of the year nominees included D’s Boutique and Renaze Salon and Day Spa, Business Equipment Service, Dirt Dynamics Excavating, Exodus Moving & Storage, Mueller Pye & Associates CPA, New Freedom Outreach Center, TPC Colorado, Ber 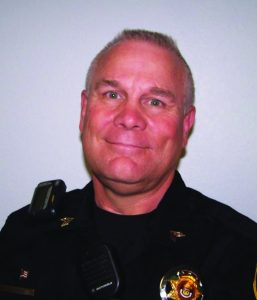 Citizen of the year was awarded to Larimer County Sheriff’s Office Berthoud Squad Sergeant Jim Anderson. Anderson was described by the chamber as showing, “…unfaltering concern and love for the residents of Berthoud.” The nomination also acknowledged the many hours Anderson commits to his position, and stated, “He has provided the town with police services that make Berthoud stand out as a great town with a great police department.” Other nominees included Pastor Hollis Hunt, Virginia Huppe and Pastor Clay Peck.

The Doctors Fickel Award was presented to Jan and Ken Grack, owners of Ken Grack Mobile RV Repair Service, 207 S. First St., Unit D in Berthoud for their dedication to volunteerism in the community and commitment to sponsoring and participating in ch

amber events. Ken was a chair on the Snowfest committee and the couple served on six committees total last year. “Because of their volunteer efforts at the chamber they were nominated as ambassadors of the month four times,” the Grack’s nomination noted. The other nominee for the award was Berthoud resident Ruth Fletcher-Carter.

Ambassador of the year was awarded to long-time resident and chamber member Virginia Huppe. Ambassadors are described as leaders and liaisons in the community who play an important role in campaigning, representing, supporting and promoting the chamber and its goals. Voting for the awards is open to all members of the Berthoud Area Chamber of Commerce.