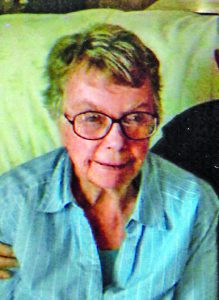 Bertha “Beth” Goodner of Loveland, Colo., passed away on Dec. 23, 2016. Beth was born in Fort Collins, Colo., to Oma and William Watson in 1936. The family later moved to Greeley. Beth almost died of pneumonia at the age of 4. She graduated from Greeley High School in 1954, and in high school she was an accomplished vocalist.

Beth married Harold “Shorty” Goodner in 1960. She and Harold moved to Berthoud, adopted and raised two sons, Jeff and Ted. Beth was a homemaker and also worked as a waitress and for McKee Medical Center as a dietary aide.

In the early ‘90s, Beth and Shorty moved to Loveland where Beth could be closer to work. Shorty passed away in 1995. Bertha remained in Loveland, accompanied by her favorite cats; Charles and Diana, and later Babe.

She was preceded in death by her parents, husband, and her brother George Watson. Beth is survived by her brother William “Bill” Watson, sons Jeff (wife Helen), Ted (wife Cindy); grandchildren Megan, Bryson and Gregor; great-grandchildren Wyatt and Matthew, and sister-in-law Mary Watson. A memorial service will be held at First Presbyterian Church in Berthoud on Friday Dec. 30, 2016, at 1 p.m. In lieu of flowers, memorial contributions may be made to Larimer County Animal Shelter in care of Kibbey-Fishburn Funeral Home.