Bells of Berthoud will ring out 15th anniversary

The 2018 holiday season marks the 15th year of the Bells of Berthoud tradition. This year the town’s church bells will ring at 5:30 p.m. on Sunday, Dec. 16, and Sunday, Dec. 23. The bell-ringing time will shift to 6:30 p.m. on Monday, Dec. 24, to avoid conflicts with local Christmas Eve services. 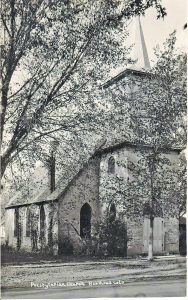 Photo Courtesy of the Berthoud Historical Society – The photo might be captioned: The Presbyterian church that once stood on Mountain Avenue had a tall bell tower added after the donor of the building lots complained about its small belfry. The long-time congregation will be participating in the 15th ringing of the Bells of Berthoud.

The Bells of Berthoud tradition got underway in December 2005. That month the Berthoud Weekly Surveyor announced, “A peal of bells will permeate the air twice this month to ring in the holidays in what Berthoud’s mayor calls a musical act of togetherness. The bells of four local churches will sound at 8 p.m. this Sunday evening and then again on Christmas Eve. Mayor Milan Karspeck, who organized the harmonious happening, said he believes the audible event will send a positive message about the town…I think it will show Berthoud’s unity and things we have in common as opposed to our differences, he said.”

Berthoud’s centrally located Fickel Park is a prime place to hear these church bells peal their holiday cheer. Each church has a bell-ringer who rings its bells individually and then simultaneously. The carefully synchronized event lasts around 10 minutes.

Berthoud’s church bell tradition goes back to the town’s early years when Golden businessman Charles C. Welch donated lots he owned on Mountain Avenue to the local Presbyterian congregation for the purpose of building a church. It was the expectation of Welch, an official of the Colorado Central Railroad with extensive land and water holdings in Berthoud and the Little Thompson Valley, that the church have a bell tower tall enough to be seen by trains approaching the town.

When the congregation ran short of money and built a modest belfry instead of a tall bell tower, Welch threatened to withhold the deeds to the lots unless they complied with his wishes. In short order the Presbyterians raised funds, erected a tall bell tower, and engaged in an unofficial steeple-building competition among the town’s churches.

Welch, who was selling building lots in his “Welch Addition” on the south side of Mountain Avenue benefitted from the tall bell tower that projected Berthoud as a God-fearing town to prospective residents.

Again this year the “Bells of Berthoud” is being organized by Milan Karspeck, former mayor and originator of the event that has become a beloved annual tradition. For three evenings this December town residents and visitors to Berthoud will gather in Fickel Park to hear the bell-ringing Karspeck organized to bring the community together.