‘Beets’ dug up for new show at Rialto Theater 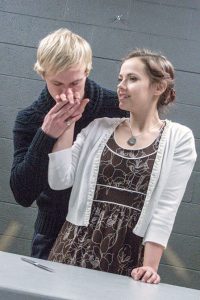 When Rick Padden ran across a 2004 Surveyor article by Mark French entitled, “German POWs work on Berthoud Farms in 1940s,” he knew he’d discovered gold. French’s article, in his Then and Now column, told the true story of several Berthoud farmers who, in the mid-1940s, were provided with German POWs from Greeley’s Camp 202 to work in their fields.

It was 2008, and Padden was the current editor at the Berthoud Weekly Surveyor. He’d been toying with the idea of trying to write a play and had been looking for a story with a local angle.

“Being a journalist, I can spot a story when I see one,” said Padden. “I saw this as a play that would be very easy to promote because no one knew the story.”

According to French’s 2004 article, most POWs on Berthoud farms were treated with compassion by the farmers, whose wives often supplemented their meager lunches with hot boiled potatoes. Some of these Colorado farmers were German immigrants to the United States who shared a common language with the POWs. One POW actually sent the Berthoud farm family he had worked for a letter after he was returned to Germany.

After more research about POWs in Northern Colorado, Padden wrote his play “Beets” in 21 days.

“It really just wrote itself,” he said.

The play got its name from the fact that many of the region’s farmers farmed sugar beets in the 1940s, as this was a major crop at the time. 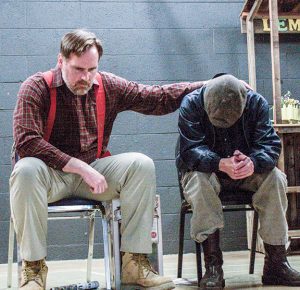 Kurt Keilbach and Scott McCoppin run through a scene in preparation for opening night.

While not a true story, the tale Padden’s “Beets” tells is one that could have played out on various farms throughout Northern Colorado during WWII. When German POWs are assigned to the Hunt family farm, father Fred doesn’t want any contact with these Nazis, whereas his wife is more benevolent, as the boys who come to their farm are the same age as her son who is fighting in Europe.

The twist in this story is the developing relationship between the Hunt daughter, Anna and one of the German POWs, Dieter.

After the play was completed, Padden joined forces with Moon Theatre Company directors Kathleen Gruman and Leslie Jones to bring the play to life on stage.

As a first-time playwright, Padden gives a lot of credit to Gruman and Jones for flushing out things like blocking and stage direction.

“I had the dialogue, story and characters well developed,” recalled Padden, “But to give direction to a director? I was a total rookie, so they (Gruman and Jones) made it work.”

The opening weekend of “Beets” was a near sell-out as audiences flocked to The Rialto Theater in Loveland to learn this little-known story.

“As a reporter or as a novelist, you can only imagine someone sitting and reading your story or book, but as a playwright it’s different,” said Padden. “You not only get to see the play unfold on stage, but you get to see the reaction of the audience. I spent most of the time watching the audience and seeing them laugh and cry, and I was just wowed.”

After the play’s successful run in Loveland, Padden began shopping “Beets” to producers and directors in Denver. In 2015 the Aurora Fox decided to do a stage reading of the play. The reading sold out, prompting them to produce the full play for a month. With the exception of opening night, the one-month run sold out, and the Aurora Fox extended the run. Those shows sold out too.

That same year, “Beets” won the Westword’s Best of Denver Best Original Script award, with the Westword proclaiming the play to be “intelligent” and “dealing with an important and generally forgotten historical topic.”

The Denver Post wrote, “Beets” is a play that should be mandatory for students interested in National History Day and eager to learn about weaving together a story and historical facts.”

The play has since been on stage in multiple venues in Denver and Boulder. Broomfield High School’s theatre department has also performed the play.

Since writing “Beets,” Padden has written seven more plays. He’s continued in the local history vein with plays such as “The Great Potato Hoax,” “Cow Dung Dust,” and a musical called “Queens of the Row.” He’s also branched out to comedy and drama.

At the end of this month, “Beets” is coming back to The Rialto. It will once again be produced by the Moon Theatre Company and directed by Gruman and Jones. It features familiar faces such as Pam Strahan, Scott McCoppin, Kyle Keilbach and Josh Jones.

“This cast is inventive and very dedicated,” said Gruman. “They’ve been very fun to work with.”

The play will be dedicated to Paul Jones, who passed away last September. Jones was a founding member of the Moon Theatre Company and appeared in numerous productions, including the lead role in the original production of “Beets.”

“Beets” is onstage March 31 through April 2, 2017. There will be just four shows, and Moon Theatre Company encourages people to purchase tickets early at RialtoTheaterCenter.org/beets/. Discounts are available for groups of 10 or more.

“I feel like this is such a pertinent time to put on this production, because it’s about accepting each other and seeing past stereotypes,” said Gruman.