Anything is possible in the playoffs 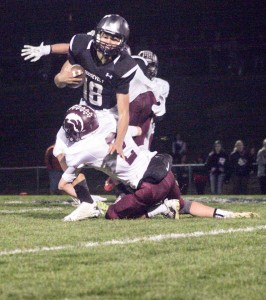 Berthoud’s Matt Bonds tackles Roosevelt’s Cameron Hurtado on Oct. 31 in Johnstown. Despite losing the game 28-14, the Spartans still made the playoffs and are set to face No. 1 Discovery Canyon this Friday night in Colorado Springs.
Karen Fate / The Surveyor

The growth and maturation of the Berthoud High School football program is evident over the course of this season.

As parents, teachers, and fans, we want all of our young people, and in this case, all student athletes, to grow and mature in a positive way. Last Friday night the Spartans grew in a very positive way as the football team played its most complete game of the year against the Roosevelt Roughriders (9-1). Berthoud and its 7-3 record have exceeded the expectations of many who follow the program–myself included.

I’ve never missed reporting a Spartans’ football game in the past six years, and in that time I’ve seen many ups and downs with the football program. Even in defeat last Friday (28-14) against the state playoffs No. 3-seeded team in 3A, Berthoud proved it can play with the best that the Colorado High School Activities Association (CHSAA) has to offer in its classification. Friday night was one of the most positive moments for the Spartans’ program in half a decade. The score didn’t truly represent the performance of these Spartans; it was much closer than a two-touchdown differential.

Coming into this season, head coach Troy Diffendaffer was determined to return the Spartans to glory. Last Friday night was a huge step in that journey toward the glorious years of the past highlighted by a state championship in 2007.

The young men who call themselves Spartans proudly walked on to Roosevelt’s home turf and played to the potential we have seen all season. The coaches and players knew if they could play with fewer mistakes on the field their chances of success would increase, and that is what we saw in Johnstown. Even more promising is that this team still has a lot of great football in it; and if the team can string together four quarters of solid execution and keep mistakes to a minimum, it can beat anyone in the state. 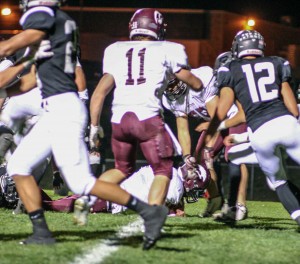 Berthoud’s Jimmy Fate crosses the goal line for the Spartan’s first score of the game in the 28-14 loss against Roosevelt on Oct. 31.
Jan Dowker / The Surveyor

After an opening drive by the Roughriders, who scored on their first possession, the Spartans’ defense stiffened their neck and flattened their backs and played outstanding football. Roosevelt came into the game averaging over 37 points a game. The Spartans had the Northern champions all knotted up at 7-7 with only eight minutes left in the fourth quarter. The maroon and white earned their touchdown on their first drive of the game with an uncharacteristic run-heavy sequence of plays to try and take advantage of Roosevelt’s three-man defensive front. The game see-sawed back and forth, with both teams playing excellent defense, until the fourth quarter when the Spartans, who have a large number of key players playing both ways, tired. The Roughriders took advantage of the opportunity and scored twice on long rushing gains to pull away.

The disappointment to play well and come out with a defeat was tempered about an hour after the game when final scores across the state were reported and Berthoud was still in the hunt for a slot in the state playoffs. Those feelings were confirmed on Sunday when the official CHSAA playoff brackets were released and Berthoud earned the No. 16 seed and will travel to Colorado Springs to play the No. 1 seed, Discovery Canyon, in the first round of the state playoffs on Nov. 7.

Discovery Canyon won its last regular-season game in overtime against Canon City to claim the top seed. But if the same Spartans we saw last week come and play to their potential it could be the second consecutive year the No. 1 seed loses to the No. 16 seed. Last year Discovery Canyon came into the first round of the playoffs as the No. 1 seed and lost to the No. 16 seed Pueblo East 47-13. Four of the eight state championship first-round games were won by lower seeds last year.

Tomorrow night’s game is already a defining moment for the players, coaches and the Berthoud football program, simply in making the playoffs. Playing up to everyone’s individual and collective ability in a state playoff game would be a watershed moment for more than the program, but for some young men who have helped change the face of Spartans football.

Football is a physically demanding game of imposing your will upon an adversary. Anything is possible when a person’s will is greater than their opponent’s. With these Spartans, who have shown the will to never quit in wins and even losses, anything is possible.