An office with a view 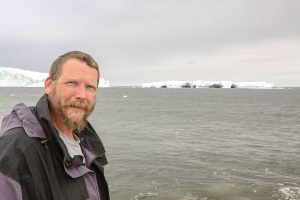 Berthoud resident and research scientist and engineer at University of Colorado – Boulder Terry Bullet traveled to Antarctica in 2014 and 2015 to install radio towers that help with research of Earth’s ionosphere.
Photo courtesy of Terry Bullett

A state-of-the-art scientific facility on the frozen coastline of Antarctica, amidst a landscape covered in ice and permafrost, was the setting of Terry Bullett’s greatest scientific accomplishment. Far from the comforts of his small Berthoud hometown and his loving family, Bullett followed in the footsteps of the original Antarctica explorers of the 1700-1800s in his excursion across the South Pacific to Antarctica. It was his vanguard development of advanced antenna designed to research radio waves in the near space environment of Earth’s ionosphere, that brought him to the southernmost landmass on the globe, where he left an engineering and scientific imprint on the land and industry.

“It reminded me of the 1700-1800s discovery expeditions,” said Bullett. He reflects on the long voyage by ship and how it gave him so much time “to think and organize.”

This surreal and strange adventure engaged his talent and passion for engineering and science. “It’s an enormous sense of accomplishment,” said Bullett.

Organizations around the world see Bullett’s published work and hire him to construct radio research towers. In this case, the sponsor for Bullett’s work in Antarctica was the Korean Polar Research Institute (KOPRI).

“They spared no expense,” said Bullett, “making this the best in the world.”

As a research scientist and engineer at the University of Colorado at Boulder, Bullett has years of experience in designing and constructing equipment to advance the study of the ionosphere (the earth’s upper atmosphere). Bullett works alongside doctoral student Justin Maybie at the University of Colorado Boulder and asked him to contribute his construction and mechanical field expertise to the Antarctica project and travel abroad with him.

“Terry is the best in the world at what he does, which is understanding how radio waves move through the atmosphere, and designing and building radar systems to make high quality observations of the environment,” said Maybie. The instruments he builds measure and collect data on the changing density, total pressure, plasma physics, and magnetic field of the ionosphere. 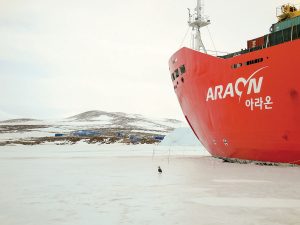 The sponsor for Bullett’s work in Antarctica was the Korean Polar Research Institute (KOPRI) who used the Araon to travel to the remote continent.
photo courtesy of Terry Bullett

November 2014, Bullett journeyed for the first time to Christchurch, New Zealand; the launch pad for his excursion to the scientific base in Antarctica. Bullett compares the landscape of Christchurch to “Lord of the Rings” films.

“It was like going to Middle Earth,” he said.

Almost directly south of this location was his destination in Antarctica. From Christchurch he boarded the 300-foot vessel, the Korean icebreaker, Araon. The seas were rough and tossed the vessel for 12 days. Bullett stated that, unlike a cruise ship, the icebreaker was built for power more than stability. During the journey, as they crossed icy waters toward the magnetic pole of Antarctica, several aboard the ship became severely ill. Fortunately, Bullett was not one of them.

“The hardest part of this particular job was the level of planning that had to go into it,” said Bullett, who started preparing for the expedition two years in advance; everything down to every nut, bolt and washer, had to be purchased beforehand and brought with him. All parts needed for the job were Bullett’s responsibility to attain and pack. “It’s difficult planning the work in a place you’ve never seen before,” said Bullet. In the end, he had two full shipping containers of equipment he brought with him.

Being on a Korean vessel meant Korean cuisine. Bullett said he never did get used to it. His wife, Suzy Bullett, had anticipated this predicament, however, and helped him pack non-perishable food items. He survived on beef jerky and trail mix.

Communication from the Araon was minimal − as the seas tossed, so did the satellite, breaking the signal. When there was a signal, Bullett hurried to get messages to his family and updated his Facebook page with his latest coordinates and experiences at sea. His posts resembling captain’s logs of famous Antarctic explorers from past centuries.

Nearing the end of the voyage the vessel slowed dramatically as it encountered ice and began breaking it up to continue forward.

“As the ice gets thicker the vessel goes slower. I think the last day we only went a mile,” said Bullett. Icebreakers work by backing up nearly half a mile, builds up speed, pushes forward until it was on top of the ice, the weight of the ship cracking the ice 100 feet at a time. It repeated this process over and over as it approached land, according to Bullett.

“After 20 days of travel. Has it been that long? And being 8,800 miles from home, Justin Maybie and I walked the last quarter mile across the sea ice from the ship to set foot on Antarctica. Now the real work begins,” Dec. 8 2014,” Facebook update.

They arrived at Jang Bogo Station, Terra Nova Bay, Antarctica. The expansive modern facility that was only two years old at the time could accommodate around 100 people. “Mothership, I call it,” said Bullett, “Beautiful facility, with breathtaking views. Very modern.” 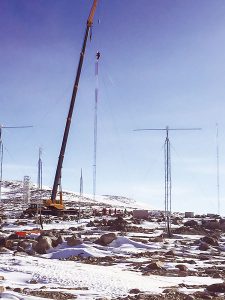 Work on an ice shelf

The work began with extensive engineering and planning. During construction lots of resources and heavy equipment were used to break through the permafrost and move enough frozen earth in order to place concrete foundations in the ground. Bullett was the chief engineer on the project.

“It’s all my design,” he said. “I had to be there to make sure it was coming together in a certain way.” Bullett stated the design “covered a physically large space.” The construction was made up of four transmit towers, each 120 feet tall. With 250 feet of space between the towers covered with a web-like array of intricate wires, the wire totaling one mile in length. Crews also constructed seven smaller receiver towers, about 20 feet tall, between the large towers and the main station.

“The finished towers are quite a structure against the otherwise barren landscape, and are expected to stand for many decades,” According to Bullett and Maybie’s scientific blog during the process.

The weather remained tolerable for the crew of four Korean and two American men. The three-month-stay in Antarctica was during the summer months where the sun never sets. “We didn’t see darkness for three months,” said Bullett. He mentioned the temperature would hover right around freezing; with mostly clear skies it was only really cold when it was windy. “The forecast is for bad weather tomorrow, so today was a 16-hour workday. The pedometer in my phone hit a record 35,560 steps, which is approximately 15 miles of hauling antenna parts out to the field. And by field, I mean a field of rocks. I’m tired, but three of four towers are in the air,” Jan. 2, 2015, Facebook update.

During “down-time” several of Bullet’s new Korean friends joined him in having a “church” service every Sunday wherever they could find a space to meet. “Church today at the bottom of the world was in Korean and held in the control room of the power plant. God is everywhere.” Dec 21, Facebook post.

The only aspect of life on Antarctica that kept time in check, despite the lack of a setting sun, were the strict meal times. Meals had to be staggered and rushed in order to get everyone through.

Holidays away from home

“These trips are like every day is Groundhog Day. You don’t really notice holidays,” said Bullett.

The best meal Bullett had while in Antarctica was the Italian feast he was treated to when his crew was invited to the nearby Italian base for Christmas. “It was the best food I had on the trip,” said Bullett.

Bullett and his wife were able to stay in contact through Skype when time allowed. He would send his four kids pictures of penguins and other things he thought they’d enjoy. Suzy did miss her husband but has been used to his consistent work travel since before they were married. “Holidays with the kids are the hardest when he is gone,” said Suzy. “Last year, the oldest stepped up and wanted to play Santa to help out.” Suzy is grateful for her husband’s work, that it allows her to stay at home with her children.

After completion of the project Bullett at last arrived back home from his lengthy travel in early February 2015.

There and back again

“Because he is the best, we were asked to travel to Antarctica to build the most advanced radar installation of its type in the world,” said Maybie. “This project has resulted in observations that are unique to Antarctica that have never before been made and is advancing our understanding of the Earth’s atmosphere.”

Bullet took a second trip to Antarctica in November 2015 through New Year’s 2016. He was beckoned to return due to wind damage that occurred to one of the towers. This time he traveled by air and it only took eight hours from New Zealand to Antarctica. The plane landed on ice and then he rode in a Snowcat from the runway, 30 miles to base. 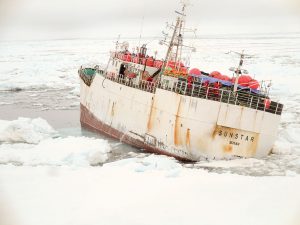 A fishing boat was stuck in the ice and the Araon was able to help it find open water again.

Once more his journey home took place on an icebreaker.

The old notion of men at sea pondering their discovery impacted Bullett. Unlike being on an airline home, he had much more time on the tossing vessel to consider the dynamics of his work and the research he had done. He took the time to write extensive code, write a paper and analyze data.

His Facebook updates spoke to the similarities he experienced with what must have been experienced by past scientific explorers detailing their voyages as they traveled. “It is 1 a.m. ship time as we traverse 69 degrees south latitude. A cloudy night on the Southern Ocean. It’s actually dark outside. Something I have not seen since late November. Perhaps this is why I have insomnia tonight? Or maybe it is the rough seas giving the Araon a bouncy ride,” Feb. 18 Facebook update.

There are so many unique things about Antarctica, he said. It’s mysterious, hostile and dangerous, and of course remote.

“All of this makes it exciting,” said Bullet, “But the thing that impacted me personally and for a long time are the friendships I made with my co-workers, both in Korea and Boulder. That kind of experience creates a bond between people that transcends traditional work relationships.”