An iconic piece of Berthoud’s history has sold

The grain tower next to the train tracks on Third Street is a highly recognizable part of Berthoud’s historic downtown. The mural on the grain elevator, commissioned by the Berthoud Arts & Humanities Alliance (BAHA), is a constant reminder of the town’s rich and vivid history.

Despite this, talk of razing the grain elevator and adjacent buildings to add parking began to circulate in Berthoud. Don and Chris Gischel, 31-year residents of town began to worry. They love the historic aspects of their town, especially the old buildings. The owners of Simply Shabulous decided they had to act. 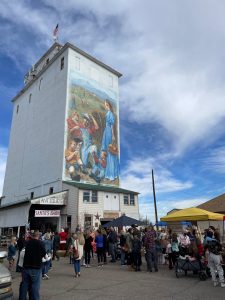 “We wanted to save it. We wanted to make sure that it stayed right where it was,” said Chris Grishel.

This past October, they bought the grain elevator and adjacent buildings which includes an old turkey processing plant with its own grain elevator. The entire grouping of buildings takes up almost the entire block of Third Street between Turner Avenue and Massachusetts Avenue.

“I wouldn’t say I’m a history buff,” says Gischel, “But I have such appreciation for the craftsmanship that existed at one time. Architecture was an art form and to see these places disappear is heartbreaking.”

While it is in the early stages of planning, the Gischel’s intend to develop the place into a historic shopping district called Sweet Oats Market at the Silo. In the 1920s, oats were mixed with molasses here to create sweet oats, thus the name pays tribute to one of the previous uses of the complex.

Located in the cement grain elevator with the mural, is The Rancher’s Wife. It is the one retail space here that is currently usable. The store sells lots of local products like Bee Squared Apiaries and coffee from Kind in Estes Park.

“I look at her store as being an anchor for the entire shopping district,” says Gischel. “She already has such a wonderful clientele and the store draws people to the area. Hopefully, by adding to what she has already created we can build a wonderful shopping area that will draw people from all over.”

Simply Shabulous will be the second commercial space located at Sweet Oats Market. Gischel hopes to move it into the wooden grain elevator in mid-2022.