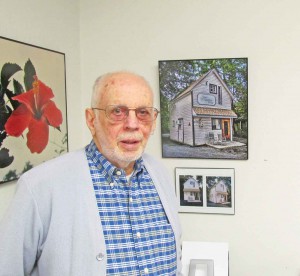 Diverse is how one could label Octavio Noda’s life.

This diverse life started some 86 years ago in Cuba. Now Noda and his wife Yolanda reside in Berthoud.

Noda left Cuba in 1959 due to Fidel Castro and the government at the time.

“You agree with Castro or are killed,” Noda said of the situation.

Before departing Cuba, Noda worked for the United States Information Service (USIS), which no longer exists, where Noda developed relationships between the United States and foreign nations. They specialized in “public diplomacy,” he said.

While employed at USIS, Noda’s training included how to take documentary pictures. He recalls a friend showing him how to develop photos in a dark room; Noda said he was 9 or 10 at the time.

In Havana, Noda hung around a darkroom, cleaning the floors and doing errands in exchange for learning more about photography. This interest in photography stays with him, even today.

Through prior business contacts in the U.S., Noda started working with libraries. He served as a librarian and film director, eventually heading the audio-visual department of three large Midwest libraries.
Later in his career he worked with library boards, but he said he tired of that.

Noda saw a need for Spanish language educational films through his work at libraries. He says he knew books and knew Spanish, so the fit seemed natural.

He negotiated with the National Film Board of Canada to distribute films in the United States. At the time, these educational materials included not only films, but also slides sets and filmstrips.

After a varied career in a few cities, Noda and his wife decided to move again. He says he remembers learning the Horace Greeley statement, “Go West young man.”

The Nodas investigated several locations in the western U.S.

He said Washington and Oregon had “too much rain.” The earthquakes in California did not appeal to Noda, and he felt Arizona “was too hot.” Utah was not a good fit either, so Colorado seemed just right.

Noda estimates Loveland’s population at 10,000 in 1971. The cost of living pleasantly surprised Noda, and he rented space in Loveland at the corner of Fourth Street and Lincoln Avenue as a base of operation for his film-distribution business.

The easy-going and less formal Loveland lifestyle both pleased and amazed Noda.

The major employer in Loveland, Hewlett-Packard, learned of Noda’s dark room experience, and he immediately started contract work with the electronics company – a relationship that lasted for years.

Noda feels he will be a Berthoud resident for a long time, even though he has considered moving to a less snowy climate.

A recent incident when Noda slipped on the steps of his front porch made him realize that Berthoud is home. The outpouring of offers to help while he recovered from a broken leg showed Noda that people in Berthoud care about others.

Noda continues to run his business, doing much of the work from home.