A special gift for Cisco 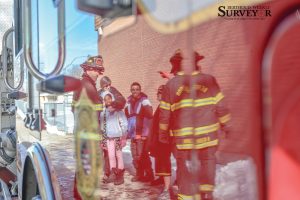 Turner Middle School eighth grader Cisco Debevec, center, is greeted by Berthoud Fire Protection District firefighters at the school on Fri. Dec. 18. The visit was a gift thanks to the fire district and to Turner’s resource officer, Kevin Kingston, who arranged the special meeting.
All photos by John Gardner / The Surveyor

Turner Middle School student Cisco Debevec had a simple Christmas wish; the only thing that he wanted for Christmas was to see a real fire truck.

Anticipation and excitement built in the hallway and classrooms of Turner Middle School on the afternoon of Dec. 18; the end of the day marked the start of the school’s two-week winter break. For Debevec the day was about to become memorable. The 14-year-old is one of the 10 special-needs students at Turner. Recently, Kevin Kingston, the school’s resource officer, found out Cisco wanted to see firemen and a real fire truck for Christmas. With his limited communication skills, Cisco said he wanted a “fire truck, man.”

“This is my Christmas present to Cisco,” Kingston said, describing the plan he formulated to grant Cisco’s wish. 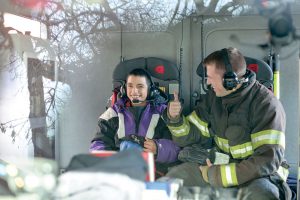 Cisco gets a thumbs-up from firefighter Jonathan Timms inside the fire truck.
The Surveyor

He said he took the resource part of his job title literally for this request.

He contacted the Berthoud Fire Protection District (BFPD) to ask about a visit from one of their units and they agreed to help with Cisco’s gift.

“The fire department immediately jumped on it,” Kingston said. “We’ve got this,” was their response, according to Kingston.

Cisco’s mother, Carly Debevec, said the family is no stranger to the fire department. The Debevecs have a total of 13 children — seven living at home. Currently, five are adopted and all have special needs. Debevec said that first responders have on occasion been called to the home for medical situations.

Carly said Cisco lives for the fire department. In addition to fire equipment, he is enamored with big trucks, buses, and obviously fire trucks.

Due to frequent visits from fire department personnel, Cisco knows many of the local fire fighters well. The staff at the west fire station has invited Cisco to come for lunch and dinner at the station too. 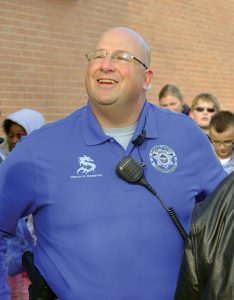 School Resource Officer Kevin Kingston talks with firefighters during the event. Kingston was responsible for setting up the meeting between Cisco and the firefighters.

Lori Meyer, a TMS exceptional student services teacher, echoed how much Cisco loves fire fighters. She remembers when a class session dealt with careers. Meyer recalls Cisco’s answer to what he wanted to be when he grew up as wanting to be a firefighter and working on firetrucks.

As the big red fire apparatus arrived at the school along with firefighters Captain Andrew Kuiken, Andy Burger, Jonathan Timms and Corbin Gray, Cisco and his siblings, Carly Debevec, Kingston, some of the Turner teachers, and a group of eighth-graders went outside to witness his wish come true. Hesitant at first, Cisco received encouragement from Kingston.

“You know this guy, Cisco?” Kingston repeated a couple of times. Kingston knew the crew, now working out of Station 1, previously worked at Station 2, closer to the Debevec home.

For more than 25 minutes the crew allowed Cisco to explore the truck and equipment. They also pulled out a fire hose so Cisco and his siblings could spray water across the school’s parking lot.

Then, equipped with a headset — like a real fireman — Cisco sat in the truck as it made lumbering laps around the parked cars in the lot. 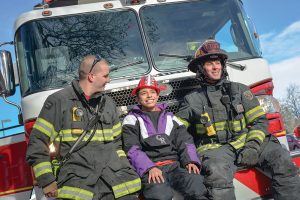 Cisco Debevec sits on the front of the Fire Engine with firefighters Andy Berger, left, and Captain Andrew Kuiken, right.
The Surveyor

Cisco was all smiles; his mother was as well.

Kingston’s police radio crackled, audible for those close by to hear.

“We would like to wish Cisco a Merry Christmas,” said the dispatcher. For a moment, Cisco’s mom teared up. Her son was happy. He got his wish.

“We see the fire department at our house a lot. This is a fun trip for him,” Carly said softly.

Cisco exited the truck with a smile and a new plastic fireman’s hat.