A night of fun and entertainment with classic Wayside menu

The iconic Wayside Inn may no longer reside on Mountain Avenue, but for two nights in late October, Moon Theatre Company will bring back its herald menu of fried chicken, mashed potatoes, rolls and honey-butter with its murder mystery/dinner theater presentation of “Stay As Dead As You Are.” 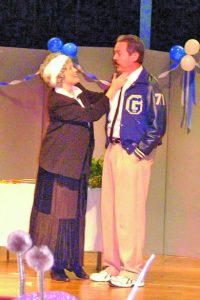 “Stay As Dead As You Are” will play Oct. 27 and 28 at the lower level of the First United Methodist Church in Berthoud. According to board director, Kathleen Gruman, the local theater troupe wanted to present something to the community since Berthoud “hasn’t had something to look forward to during the Halloween season in some time,” and no dinner-theater-based program since the old Wayside Inn closed.

“Stay As Dead As You Are” is a comedy/murder mystery by Lee Mueller that revolves around a murder that may or may not have taken place at a 35-year high school reunion. However, Gruman noted the show will be tweaked to be set in Berthoud High School, featuring plenty of references to local landmarks and people.

Robert Bubon, who plays Marty “Budman” Budinski in the production, described it as “a murder mystery that never really is a murder mystery, but it pretends to be one the entire time.” Gruman added: “It’s very comedic. It’s not very serious at all.”

The cast was quick to note the lightheartedness of the play in which the audience will become a part of the set, since the dinner they are enjoying is also part of the reunion.

“There is some audience participation, but not the kind where you drag people up to the stage,” actor Pam Strahan remarked. “We do play off of them; talk to them. They’re part of the reunion, they are classmates.”

Actor Jean Nott, who plays the lunch lady Ms. Sauerberger, added: “I just got back from my 50th high school reunion back east, and believe it or not you see some similarities,” she said with a smile.

The dinner will be catered by the ladies of the First United Methodist Church, headed by Leanna Konechne. According to Gruman, the dinner will feature all the trademarks of the old Wayside menu, including their famous honey-butter rolls, homemade apple pie and fried chicken, of course.

Chris Willenbrock will serve as the director for Berthoud’s rendition of “Stay As Dead As You Are,” her first foray with Moon Theatre, though she has worked on several other dinner theaters in the past.

“There are some familiar faces in this cast and there are some new faces,” Gruman said. “We got actors from Longmont and Fort Collins and Loveland. We are really excited to have these amazing actors to work with.”

“In this particular show these are all very experienced actors, which is great, because this show requires a lot of improvisation. That can be very intimidating for a fledgling actor.”

“Stay As Dead As You Are” runs Oct. 27 and 28 at the First United Methodist Church located at 820 Ninth St. Tickets are $30, which includes dinner and the show. There is limited seating available so it is recommended you purchase soon at www.moontheatre.wordpress.com. Seating begins at 6:30 with the show at 7:15 p.m.