A most pleasant exchange 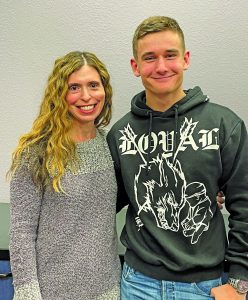 In 1989, Kim Doerksen’s mother Tomma came to America from Germany to study abroad in a small town near South Bend, IN. She became close with her host family’s daughter, Teresa Smith. So close they called one another sister. They stayed close over the years. When Teresa’s mother, Myrtle, (Tomma’s host mother) turned 70 in 2019, Tomma flew in from Hamburg for the birthday celebration. By then she was married with two sons. Kim, her younger son, was fifteen. Teresa Smith, too, was married to Robert Armstrong and living in Berthoud. By the time the visit ended, preparations for another student exchange had begun. Then Covid. Now, two years later, Kim is attending Berthoud High School for the entire academic year.  His mother’s host sister is his host mom. This second generation of student exchanges has been a good fit from the start.

“I felt comfortable immediately,” Kim, who hails from a small town outside Hamburg, said. “Feels like home. I love that I can walk to school, but I usually take a ride from a friend. At home, my school is 12 kilometers away. It’s exhausting on my bike. Plus everyone is so nice here. I made friends immediately.  My first day I made a best friend who introduced me to everyone. It’s cool.”

His English is solid. In Germany English lessons are mandatory; they begin in fifth grade. For anyone who has ever tackled a foreign language, it’s an achievement to become conversational. To cross-train in humor is a sign of mastery. Kim has mastered the language. Pleasant, calm and quick with a smile, he’s made many friends in his short time here. When confronted with mischievous requests from those eager to learn German curse words, he gives them silly, benign terms sure to confuse instead of shock.

What Kim has quickly learned: school here is vastly different. “In Germany, we stay with the same group of people all day in the same classroom. The teacher comes to us. That teacher is our ‘dad’ or ‘mom.’ Someone we can always talk to. I like it. We stay together, do homework together. It’s a lot of teamwork. We have twenty-minute breaks after each class.  We can go outside or to another classroom to visit. Classes last ninety minutes.”

As much as Kim likes that, he also likes moving around at BHS. “I get to meet new people. It’s more exciting.”

What’s also exciting are new foods. “I love burritos! We don’t have those. And your bacon is crispier. It’s better. But the bigger servings…well, even the medium size is too much. Sometimes I order smaller things.”

Even more surprising is our car culture. “First thing I recognized is cars here are really big, and you can drive with a dent. In Germany, you cannot drive a damaged car. Even a broken light you must have proof of an appointment to show you’re getting it fixed. And here everyone’s driving at sixteen. No one drives a stick. We learn to drive stick shifts back home.”

Another quick lesson shared about Germans: They may drink early at age 16 but they drive later at 18. Laws against mixing the two are strict and respected. Offenders face permanent loss of the driving privilege. To be caught with any drugs or alcohol in your car in your first two years of driving can cost your license as well.

As a guest in our country, he follows the rules, not the crowd. “I don’t imbibe. I’m going to stay safe.”

As for extracurricular activities, Kim joined a gym nearby where he can continue his martial arts training. In a land where soccer rules, he prefers individual sports. “I don’t like the pressure knowing my mistake can hurt the team. In martial arts competition, I make a mistake, I lose, it’s my fault.  When I win, it’s my win.”

Something tells me Kim wins a lot, but not one boastful word is shared.

Not sure who’s learning more from this most pleasant exchange.