Bob and Donna Conde’s son Spc. Gabriel Conde was killed in action while serving in Afghanistan in April 2018. He was 22 years old. Gabe’s life and mission are now being honored through a book of Gabe’s written works the couple has compiled.

After the loss of their son Bob received Gabe’s journals from his deployment and found hundreds of writings he had left behind on his computer, “He had a lot of words he needed to get out,” Bob reflected. It wasn’t long before the couple decided they wanted to pursue publishing the writings. Bob began the process of researching publishers and took on the task of going through numerous documents, which became an intense labor of love.

The works included many poems that will appear in the first half of the book, short stories and journal entries that make up the second. Some penned years ago and others while Gabe was deployed. Some funny, like his “Ode to Chew” others deeply intimate and profound thoughts flowing from a young man, a person of faith and a soldier.

Bob said that while he was working on compiling the book that would be titled “And Evil Shall Be Vanquished: A Warriors Anthology of Original Poetry and Other Writings,” it became a “healing journey,” hearing Gabe’s heart expressed through his words, “I would start to read and just start bawling my eyes out.” 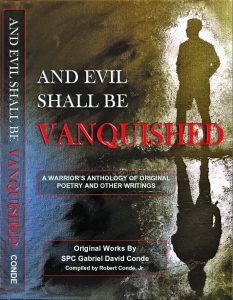 When Gabe was a child Donna encouraged her son to start writing as, “a good way to process feelings,” she said. She continued by saying Gabe took off with it and became not only prolific but matured into a good writer, but not necessarily a good speller.

Gabe graduated from Berthoud High School in 2014 where he excelled at academics before heading off to the Colorado School of Mines. Discontent with being in school Gabe wanted to join the military and had a goal to become a Green Beret. He enlisted in 2015 and after a time stationed in Alaska was deployed to Afghanistan in September 2017.

While reflecting on several of Gabe’s poems, including a piece that in essence was an epilogue to his own life, Donna said, “it was clear to us that he knew he would die…in a way that was powerful for us, he was ready, he didn’t second guess himself.” Conde was killed during a combat mission protecting his team during a firefight.

On the back cover of the book this statement summarizes where the book will take its readers, “… his insights and observations of the human experience including his resolve to live passionately and die heroically will evoke thoughts and emotions that will change the way you think about yourself, the people you love and the God who blessed you with life.”

When asked what they hoped people would take away from it Bob said, “My hope is they get what they need, encouragement, hope, tears, there is something everyone can connect with in his work.” Donna remarked that, “He drank, he smoked, he cursed…and he loved God and people with all his heart, that’s what I hope comes through.”

Although the book originally wasn’t slated to be available until late November or December Donna had hoped it would be available by Gabe’s birthday, November 2. The book, published through LifeBridge Publishing is now available through most retailers including Amazon and Barnes & Noble.