A growing sport with a champion in our midst

The Junior Disc Golf World Champion is Hailey Huber, a 12-year-old who lives in Berthoud. The competition was held in Illinois this July. Huber has quickly risen the ranks and is currently sponsored by Innova, a disc golf equipment company. 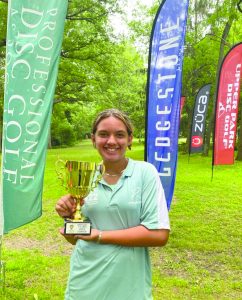 World Champion Hailey Huber holds the tripy she received for winning the world-wide tournament in Illinois earlier this year.

The sport has grown significantly in the last several pandemic years. Hailey Huber’s father, Kristopher Huber, says that it took the Professional Disc Golf Association (PDGA) 40 years to get to 100,000 members and less than 40 months go to 250,000 members. He, Hailey and Adyson, his eight-year-old daughter, are members.

Hailey, who has been playing tournaments for two and a half years, has played in nine and has placed first in seven. There is little doubt that she’s a natural, but she spends a lot of time practicing. She practices her putting daily in the family house’s basement.

In disc golf, the player throws a disc from the tee towards a target which is the “hole,” usually an elevated basket. If it is a long fairway, and the disc lands short of the hole, the player must make decisions on which disc to throw to the next spot. There are a number of discs with different throw lengths, just like golf clubs have various hit lengths.

In a way, it is like traditional golf but there are often more obstacles for the player to throw around like trees, shrubs and terrain changes between the tee and the “hole.” In the end, the player must “putt” the disc into the basket to complete the hole.

In the summer of 2018, Kristopher Huber brought home discs and that was the beginning of what has become the family’s game. While, at this point, the Hubers have spent a lot on the game they love, the accessibility of the sport is one thing that has helped disc golf grow. That, and it’s an outdoor game, which made it a popular pandemic sport.

Hailey notes that anyone can go to a sports store and buy a set of discs and start playing. They can even find used discs at stores like Canyon Collectibles in Loveland. Most courses are free to play, and all the Hubers note the friendliness of the disc golf community.

“If your friends have discs lying around the house, ask to borrow them and go to Mehaffey Park Disc Golf Course or Walt Clark Middle School where there is a course,” said Hailey. “If you think, ‘wow, this is really fun’ go to The Wright Life (Fort Collins) or Play it Again Sports (Longmont) and buy some discs.”

There is not a disc golf course in Berthoud, so the family most often plays in Longmont or Loveland. According to udisc.com, Longmont, which is ranked the 9th best disc golf destination in Colorado, boasts eight courses. Colorado Springs is the No. 1 ranked best place for disc golf in Colorado with 13 courses.

“Udisc is one of the best disc golf apps,” said Kristopher. “It helps you find courses and stores.”

“And even find tee boxes on the courses,” added Hailey.

Formed in 2001, the Hubers are members of the Longs Peak Disc Golf Club in Longmont and play there every Wednesday night. The league plays courses in Longmont, Erie and Mead. Membership is $2o per year with lots of perks like buy one get one free on used discs.

It is hard to pick a favorite course, but Hailey states that the course at Roanoke Park in Illinois is her current favorite because it has the right amount of complexity. Hailey loves many aspects of the sport, and of course, winning is great, but talking with her, it becomes evident that she enjoys the technical aspects of picking the right disc for the throw, the type of throw to use and the difficulty of the course.

It is not inexpensive to get to tournaments held outside of Colorado, so the Hubers hold fundraisers. Most recently, to get to Illinois, the family put together a “Hucking for Hailey” disc golf competition wherein each person played to pay, plus there was a raffle. They are going to put together another one for a fall tournament Hailey has qualified for in Austin, Texas.

To help Hailey get to Austin, the Hubers post information about their fundraisers in the Berthoud Forum on Facebook and on disc golf online platforms, like discgolfscene.com and udisc.com. If you’d like to help directly, their Venmo account is Kris Huber at @MountainUs.