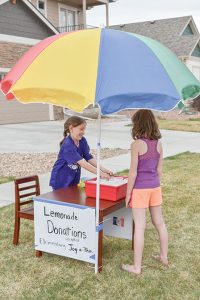 While the Thompson School District explores innovative ways to provide quality education on a minimal budget, one Berthoud El student has been quietly supporting her school during its spring fundraiser in a simple but creative way since she was in kindergarten.

Like most schools, Berthoud El students solicit donations from family, friends and neighbors for their annual school fundraiser each spring. At Berthoud El, that fundraiser is Jogathon, an event which supports the school’s wellness initiative.

Second-grader Cadence Bailey is one of those students busily raising money for her school this season, but she’s doing it without going door to door. For the third year running, Cadence set up a lemonade stand outside of her Gateway Park home to sell to passersby.

“I picked lemonade because my family likes lemonade a lot,” said Cadence. “I get to wave when a car comes up and say ‘Come get your lemonade!’”

Cadence’s mom, Amanda Bailey, said she encouraged the idea of a lemonade stand because she refused to send Cadence around house to house to ask neighbors for money. She said the stand allows people to come to them instead.

Cadence advertised the lemonade stand on Facebook’s community pages before each of the three stands she held throughout March and April. The sign taped to the stand advertised “Donations accepted to support Jogathon,” but Amanda said lemonade was given away for free to anyone who was unable to donate.

Jogathon is a joint effort by the school’s PTA and Healthy Kids Club to promote wellness at the school. In addition to the event itself, during which students run, jog or walk laps to encourage health and wellness, 100 percent of proceeds from the fundraiser are used to purchase playground and gym equipment.

The annual goal is $10,000, and Jogathon coordinator Jamie Flint said that goal has been reached in each of the past four years she has helped organize the event. In the years before Flint came on board, the event raised $5,000-$7,000 per year. All in all, students have raised close to $65,000 over its eight years of Jogathon.

Proceeds from Jogathon have helped purchase playground items such as an infinity loop, a new climbing wall for the gym, filtered water fountains, and a GoNoodle Plus indoor recess online membership for the school.

For their participation all students receive t-shirts courtesy of Healthy Kids Club, and kids who collect donations have the opportunity to win prizes, such as a classroom pizza party, after school inflatables party, or a new bike. In addition, students completing the most laps are recognized with a certificate at the school’s end-of-the year ceremony.

But for Cadence, raising money for her school isn’t about winning prizes, it’s about helping purchase new equipment she said the school desperately needs.

“Our school is really old, so we need new stuff!” she said. “I really hope the school buys new playground equipment – ours is so old it’s from when one of my teachers, Ms. Allshouse, went to school there!”

According to Amanda, during her last stand of the season Cadence met and exceeded her goal of $100 for the third year in a row, with a final total of $137, which the family will round up to $150 before donating to the school.

Jogathon take place on April 24 at Berthoud El, with grade levels staggered throughout the day. Family and friends are invited to cheer, walk or run with students during their scheduled time slots. Community members are invited to contribute to the fundraiser through donations made to any Berthoud El student, or by contacting the school directly.

As for Cadence, while she confessed that while life hanging out, relaxing, and skipping homework when operating her lemonade stand has been pretty good, she said she has no plans of going into sales long-term.

“My first-grade teacher Mrs. Wilson inspired me to be a teacher when I grow up,” she said. “She taught me that teaching little kiddos can inspire them to be nice to each other and make new friendships.”