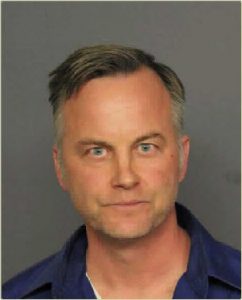 On February 2, 2019, at approximately 10:00 p.m., an employee of Berthoud Hometown Liquor located at 425 Meadowlark Drive called the Larimer County Sheriff’s Office to report an employee missing. The caller said a regular customer known to him as Will McDonough came into the store around 8:30 p.m. and asked for a ride because his car was out of gas. An adult female employee agreed and they both left. When the woman did not return to the store, the caller contacted LCSO.
The investigation has revealed that William Phillip McDonough (11/27/1974) of Berthoud convinced the woman that he should drive her car because he knew where they were going. Instead of driving to his home, McDonough drove to the Sheraton Denver Downtown Hotel located at 1550 Court Place despite the woman’s pleas to the contrary.
At the hotel, McDonough disrupted a large group in a ballroom which prompted calls to the Denver Police Department. DPD arrived and arrested McDonough for a municipal violation for carrying a concealed weapon without a permit. He was booked into the Denver City Jail. The woman was found safe by DPD at the hotel. She was not injured and McDonough did not threaten her with the weapon.
On February 5, 2019, LCSO investigators obtained a 2nd Degree Kidnapping arrest warrant for McDonough. McDonough posted $20,000 bond for the warrant and was released from the Denver City Jail this afternoon. His booking photo is attached courtesy of the Denver City Jail.
The investigation is ongoing and additional allegations may be sought against McDonough by LCSO investigators. Anyone with information regarding this incident is asked to call Larimer County Sheriff’s Office Investigator Drew Weber at 970-498-5172.
The charges are merely an accusation and the defendant is presumed innocent until, and unless, proven guilty.