It may not have been exactly the way the Berthoud High School (BHS) girls basketball team wanted to go into Christmas break – Berthoud lost 65-51 to Evergreen at BHS last Friday – but the team cannot be displeased with how they have played in the opening weeks of the season. The loss was Berthoud’s first blemish on the season and the team heads into Christmas break with a 7-1 record. 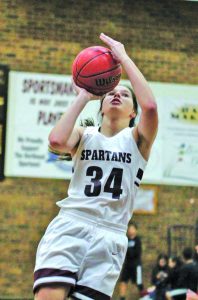 Photo by Tiffany Rafferty – Berthoud’s Celsey Selland goes up for a shot in a game earlier this season. Berthoud lost their most recent game against Evergreen but go in Christmas break with a 7-1 record and are ranked No. 7 in 4A RPI.

The Lady Spartans kept the game close throughout the first 24 minutes of play. Berthoud trailed by just two at halftime, 26-24, and were able to tie the score at 41-all after three period of play. Yet Evergreen, the defending 4A state champions, went on a tear in the fourth quarter, out-scoring their hosts 24-10 in the period to take hand Berthoud their first defeat of the season.

Berthoud (7-1, 1-0 conf.) will travel to Frederick and Fort Morgan for a pair of conference games to begin the new year. The Lady Spartans will return home to host Roosevelt on Jan. 10.

On back-to-back days just before the holiday break, the BHS girls swimming and diving team got to face off with some of the best competition Northern Colorado has to offer. Berthoud competed in the All-City Championships that pitted the four Thompson School District teams against one another on Dec. 21 and the next day participated in the eight-team Windsor Holiday Spectacular.

Berthoud took third place in Saturday’s event with a team score of 144, behind only Greeley West (321) and host Windsor (512) in the eight-team field. The day prior, Berthoud scored 547 points as a team but were edged by slightest of margins by Thompson Valley (554) for second-place while all four teams looked up at Loveland (747).

Sophomore Jamie Dellwardt continued her stellar season for Berthoud, winning first-place in the 200-yard individual medley with a time of 2:15.64, over 10 seconds faster than Loveland’s Delaney McNally. Dellwardt also took second place in 100-yard backstroke. Dellwardt’s victory 200 IM was Berthoud’s lone first-place finish on the day but several other Lady Spartans fared well in the meet. Abigail Dodd placed second in the 100-yard (59:94) freestyle and third in the 50 (27.36) free.

Kristina Ball (6:24.37) and Trinity Payne (6:27.15) took third and fourth place in the 500-yard freestyle endurance race while Berthoud relay teams took third place in both the 200-yard (Dodd, Marin Kasperbauer, Kysa Keck, Dellwardt) and 400-yard (Dodd, Kristina Ball, Emma Tartaglia, Dellwardt) free relays. Dellwardt’s time in the 200 IM as well as both relay teams and both races in which Dodd placed were completed with state-qualifying times.

Dellwardt shined once again for Berthoud in Windsor, taking second-place in both the 100-yard breaststroke event, just under three-quarters of a second out of first place, and the 200 free (2:05.39). Berthoud finished in fourth place in the 200 free relay and 200-yard medley relay events.

Berthoud will be back in the pool on Jan. 5 when they compete in the Mountain View Invitational in Loveland. 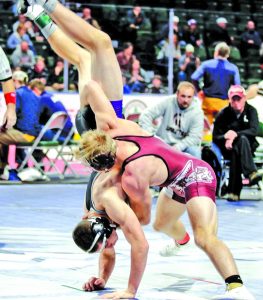 Photo by Melanie Johnson – Berthoud’s Austyn Binkly flips his opponent upside down in a match at the Northern Colorado Christmas Tournament in mid-December. Binkly, the defending 3A state champion, is ranked No. 1 in the 3A 145lb class going into the holiday break.

The BHS wrestling team was without four regulars when they took to the mat for their final competition before Christmas, ultimately losing last Wednesday’s dual to Fort Morgan by a 51-12 final. Berthoud offered forfeits in the 106, 120, 126, 170, 195 and 285lb weight classes. In the 113lb class, Berthoud’s Cale Stroh accepted a forfeit and the Spartans picked up wins from two standout seniors, Austyn Binkly and Brock Johnson.

Binkly entered the break on a high note, winning his match in the 152lb class with a convincing 13-6 decision over Fort Morgan’s Kase Givens. Johnson also posted a victory, winning a 5-3 decision over Brian Paxton in the 182lb division. Four Berthoud wrestlers – Talyn Massie (132), Tanner Coble (138), Nick Campbell (160) and Peter Bullet (220) – lost  via the pin while Brock Leypoldt (145) lost a 6-1 decision.

The Spartans will get back on the mat on Jan. 9 when they welcome Windsor to town for a dual in the BHS gym.