Fourteen-year-old Ayla Hermanson started shooting to hang out with her father, but now she’s heading to state for two of seven disciplines in 4-H Shooting Sports.

Hermanson, 14, a ninth grader at Berthoud High School and a Berthoud resident, will compete at the Colorado State Fair in .22 rifle, air rifle and two air-rifle classes. She will compete Aug. 18-19 before the start of the fair, Aug. 24-Sept. 3. 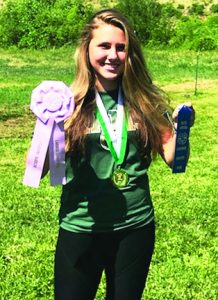 Courtesy photo – Ayla Hermanson, 14, of Berthoud, holds up her various ribbons for earning a place in state in 4-H shooting sports.

“It gives me a sense of control and power because it depends all on me and how I shoot,” Hermanson said. “I learn more every year, so I get better every year.”

Hermanson, a member of the Sagebrush Riders 4-H Club in Berthoud, began participating in 4-H six years ago to gain a new hobby. She competes in several horse projects, including English, Western and gymkhana riding and ranch riding/reigning, and is part of the Interscholastic Equestrian Association that is separate from 4-H. She has three horses, but mainly rides a gray Quarter Horse cross named Shilo and has been riding since she was four. She also participated in cake decorating and photography for the first couple of years of her participation in 4-H, but didn’t continue because of time. To add to her list, Hermanson serves as one of five junior leaders of her club, mentoring younger 4-H members.

Four years ago she began participating in shooting sports, starting with archery, but soon discontinued that to focus on the rifle sports.

“Once I started shooting I automatically found out I was pretty good at it,” Hermanson said. “I guess it’s in the family. My grandpa and dad shoot and hunt, and it was passed down to me.”

Hermanson went to state in 2016 in air rifle and archery and in 2017 in air rifle and two air-rifle classes, the utility class and air rifle 3P (3 position) using a peep sight. Peep sight refers to using a rifle with sights, while basic utility is for rifles without sights. This year she will add the .22 rifle to her competition list.

In the county shoot July 14, Hermanson placed as reserve grand champion both in .22 rifle and air rifle and third place in 4P and 4th place in 3P. To compete, 4-H members engage in a five-minute sight-in period, shooting from a prone position, and shoot for another 30 minutes from all positions of prone, standing, sitting and kneeling. They shoot at five targets on the target board for each of the positions.

“I like the challenge of doing the new categories every year,” Hermanson said.

One of her coaches, Jim Easthouse, superintendent of air rifle and air pistol, encourages her to try different things.

“He sees the potential in her and pushes her outside of her box, which has been really great,” Dana said. “Overall, 4-H has been an awesome experience for her. She’s met so many great and amazing friends and families through the program.”

“Ayla is very proficient at shooting, and she picks up new things very rapidly. You can give her a different set of sights or scenarios of shooting and she will pick it up and excel at it very quickly,” Eastman said. “She’s very coachable, very attentive, willing to learn and willing to listen, where most kids aren’t.”