Berthoud firefighters continue to help with Carr Fire in Calif. 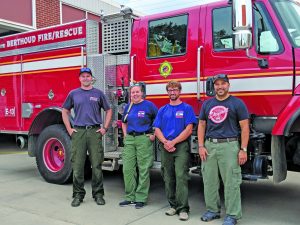 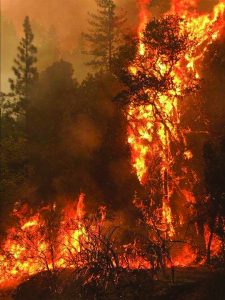 Photo by Captain Nico Romero – Fire engulfing trees at the front lines of the Carr Fire in Redding, Calif.

On July 27 Berthoud Fire Protection District’s Engine 13 deployed to the Carr Fire in Redding, Calif. Captain Nico Romero, Firefighter Alex Huggins, Reserve Firefighter Christ Robinson and Reserve firefighter Madeline Abrahamson make up the four-person crew, Berthoud Fire has aided in many wildfires in California over the years. The Berthoud crew is assigned to the most active part of the fire outside of Redding in Division F. They are creating fire breaks to prevent fire spread. Captain Romero stated that despite the efforts of firefighters involved, the fire is growing faster then they can contain it at this time. “We have lost 20,000 acres every day when we come back to the line,” said Captain Romero (Meaning, after resting at camp each day they come back and the fire has grown another 20,000 acres). Our crew is working in an area that has “rough terrain with 45-50 degree inclines,” Romero said. Due to high wind and the erratic flow of the fire, spot fires are starting and multiple strike teams are having a hard time stopping it’s spread. In addition to the intensity of the fire, conditions are hot, smoky, and weather patterns unusual due to the severity of the fire. As of Friday, Aug. 3, 131,896 acres have burned with 39% contained. 1,067 residential homes, 19 commercial buildings and 481 other structures have been completely destroyed.