Last Saturday afternoon at 5:17 p.m. Berthoud Fire Protection District and the Larimer County Sheriff’s Dept., responded to a fully-involved building fire in the 22000 block of Weld County Road 3. Berthoud Fire responded with Engine 1, Engine 2 and a water tender. The owner of the property is Bruce Clark. 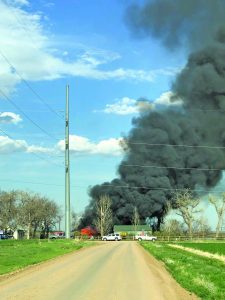 Photos courtesy of Jan Dowker – The plume of smoke could be seen for miles around Berthoud Saturday April 28.

Josh Jones is a neighbor and said, “I can tell you that it was definitely a very scary sight to see, especially with all the booms going on. Bruce had just filled all his gas cans earlier that day plus he had a lot of propane cylinders from camping in the barn. I generally see Bruce out around his farm doing work so when I looked out my window saw the barn on fire and didn’t see him, that’s when I really got scared. I jumped in my truck and drove over there as fast as I could and ran up thinking he was inside the fire. But when I rounded the corner, I actually found him on the back side of his house standing in his doorway just watching it. He told me that he had just gotten done mowing the lawn and pulled the mower in the barn and decided to go in the house to watch the 5 o’clock news and he started hearing the booms as well. He is a very nice old man, the last person I would want to see be harmed by a fire. The farm has been in his family for three generations.”

A press release from Berthoud Fire indicated the flames were approximately 20-25 feet high upon time of arrival. The garage structure was approximately 50’ x 20’ in size. The fire was creating a substantial smoke plume. There were other structures in the area; such as a home, three silos, and other out buildings that were not immediately threatened by the fire. Fire crews used a combination of foam suppressant and water. Units established a tanker shuttle using a hydrant one mile north of the scene to provide a water supply for fire suppression. The water tenders from Berthoud and Loveland worked in tandem, delivering 1,800- 2,000 gallons of water to the scene. Some of the fire spread to grass nearby but was kept from further spread. By 5:26 p.m. Berthoud crews had the fire under control. At 5:49 p.m. the fire was fully extinguished and crews began identifying and mitigating any remaining hot spots in the debris by adding water. This procedure helps  prevent a possible rekindling of heat or embers once the scene is cleared. There were several combustibles inside the structure during the fire; such as fuel, propane and ammunition. This can create a dangerous situation for firefighters as these elements begin exploding in the fire. The structure was a total loss, along with five vehicles inside; including a van, truck, sedan, tractor and mower. 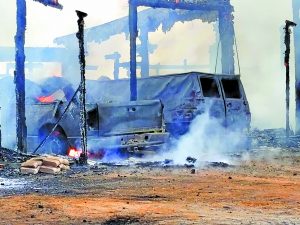 Photo courtesy of Berthoud Fire – Five vehicles were a total loss along with a structure during the fire Saturday April 28 on Weld County Road 3.

No one was injured and no animals were involved.

Loveland Fire Rescue Authority also responded with an engine and water tender. Investigations began immediately, once the fire was extinguished and Berthoud Fire had the assistance of a Longmont Fire investigator who was on scene at the time. The cause of the fire is undermined, but the origin is believed to be in or around the mower that had been used earlier in the day.