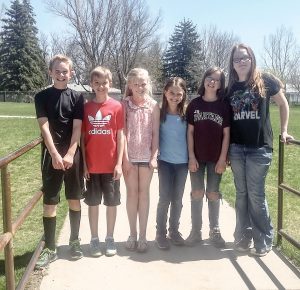 Each year a panel of educators sifts through poetry entries from students across the nation, searching for examples of excellent work at each grade level for publication in Young American Poetry Digest.

The digest is part of the National Schools Project, which was started in 1994 to share the writing of America’s most talented youth. All schools nationwide are invited to participate.

Submissions are judged on their creativity, age-appropriate language, sensory/figurative images, structure, and poetic technique. Students whose work is chosen receive a free copy of the book for their school library.

This year Berthoud Elementary librarian, Michelle Kouns, had each of her fifth-grade students write a haiku poem during their library time to submit to the contest. She sent the poems in for review and was recently informed six of those students’ pieces were chosen for publication.

Bobby Holt, who wrote about fall, said he chose his topic because it’s always been his favorite time of year. “I’m really excited,” said Holt. “I can’t wait to read the book over and over again.”

Kaleb Johnson and Sophie Feller also wrote about the weather. Johnson said he felt honored that out of all the people who entered, his poem was chosen. Feller agreed, saying she was shocked to hear only the best poems got in, and hers was one of them.

Liberty Markey chose birds for her topic, because she said they are smarter than people think. “On a farm they have a scarecrow, and birds know that the scarecrow is bad,” said Markey. “I used the word ‘foe’ to describe the scarecrow, and rhymed all my lines with ‘foe’ and ‘crow.’”

Markey, who wants to be a singer someday, said she hopes being published now will help her be successful in her songwriting when she grows up.

The Berthoud El library will receive a copy of this year’s “Young American Poetry Digest” sometime next fall, and the six students featured say they all plan to purchase copies of their own.

“My parents are buying five copies,” said Feller, “Some to keep and some to give away.” Markey said she plans to start saving now so she can buy a display case to house her copy once it’s available.

Thoren has yet to decide what she’ll do with her copy of the book, but said, “I’ll just be excited to read it.”

The 2016 Young American Poetry Digest can be purchased online at www.youngpoets.org for $15.50 a copy.