Saturday, June 24, from 11 a.m. to 6 p.m. the fifth annual Hops and Harley event will take place at Fickel Park in Berthoud. This free community event is family and dog-friendly; and will feature live music, craft beer, food trucks, vendors, kid’s activities, a dog barn hunt, and much more. 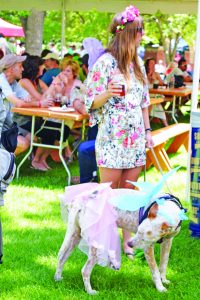 A 2016 Hops and Harley attendee dressed to match her four-legged friend. This year’s Doggy Doppelgänger Contest will be held at 4 p.m. So if you bear an uncanny resemblance to your canine sign up online at citystarbrewing.com/doggy-doppelganger-contest/ or at the Hops and Harley booth by 3:30 p.m.

All proceeds from the event will go to benefit Harley’s Dream, a local nonprofit organization established in 2016 to create awareness and educate the public  about the commercial dog-breeding industry, which is also known as “puppy-mills.”

The event was originally conceived by Berthoud residents Rudi and Dan Taylor who, through the National Mill Dog Rescue, adopted an abused and neglected six-pound Chihuahua named Harley. Harley had spent 10 years living in a filthy cage at a puppy-mill, with no medical care, where he lost an eye when his cage was power-washed.

Once in the care of the Taylors, veterinarians didn’t give Harley much hope of surviving long, due to the medical conditions he developed in the dismal conditions he was forced to exist in at the mill. Harley had different plans, however, and fought his way back to live another five years as a happy and inspiring force for good.

Harley’s owners decided to advocate and educate the public about the puppy-mill industry and, along with Harley as their “spokes-dog,” helped participate in the freeing of more than 700 dogs.  In 2015 Harley was given the American Humane Association’s Hero Dog award.

Sadly Harley passed away in March of 2016, but his legacy lives on as the cause he and his owners championed continues.