Haskins take a hike — a long one 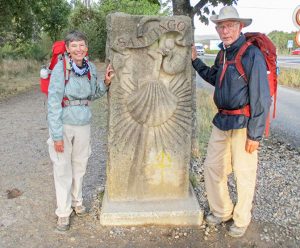 Betsy and Ric Haskins rest on the last leg of their 500-mile pilgrimage.
Courtesy of Ric Haskins

One day last year, Ric and Betsy Haskins decided to go for a walk. This may not seem like big news, but their walk covered many miles over many days in foreign countries.

The Berthoud couple says the seed of the idea for a long-distance trek came about in 2013. The duo was visiting friends in Spain. Together the group visited the town of Burgos. There they saw hikers with backpacks and many with walking sticks. The Haskins asked their friends what was going on. At that time the Haskins learned about the Camino de Santiago pilgrimage.

This pilgrimage, translated into English, means “The way of Saint James.” Legend says the walk started when the bones of Saint James were found in the city where the walk ends. Hikers start in France. On the first day they crossed into Spain. Part of the 500-mile walk involves the Pyrenees mountain range.

Returning home, they saw a movie, “The Way,” that depicted the walk. This 2010 drama film was directed, produced and written by Emilio Estevez. It starred his father, Martin Sheen.

Ric says the movie depicted the walk as an easy trek.

“The movie simplified it a lot.” Ric said, reflecting on what turned out to be his and his wife’s 39-day journey. “His feet didn’t hurt as much as ours,” added Betsy.

So, last year the Haskins started their own Camino pilgrimage on Aug. 19, finishing it on Sept. 26.

Of the 39 days on the trail, the Haskins only rested for three days as they worked to get to Santiago de Compostela in Spain. The rigors of going an average of 14 miles a day, (some days they only went 12 miles and other days the miles added up to 18), is what caused them to stop and refresh occasionally.

Ric, 68, and Betsy, 69, knew they had to do a lot of exercise to prepare their bodies for the grind of walking a great distance every day. Later, once they started the actual walk, they met people of all ages, including an 81-year-old. He boasted he had made the trip last year too — in 31 days. “Age was not a deterrent,” Betsy said.
They learned some take on the walk without training, but Haskins knew they wanted to be ready. “Let’s start walking and see if we can walk up to 15 miles a day, “Betsy remembers thinking.

Prior to considering this long trek, Ric was not much of a walker.

“I couldn’t persuade Ric to walk around the block with me.” Betsy said.

“If we are going to go downtown here in Berthoud, I will drive to store.” Ric laughed. “I hated walking,” he said, shaking his head.

The training started with small hikes once a week, for over a year, before going on the trip. These would be around town and in the country. The miles increased from four to six, and eventually 10. Finally, they were able to do a walk of 15 miles in a day.

“I was dying on the way home,” Ric remembers about the 10-mile hike. He said his feet and legs ached.

Fifteen miles in one day was an accomplishment, but the Haskins knew they would be doing close to that length every day on their trip. To try for two days in a row, they set aside a Friday and Saturday.

“We had to know we could get up the next morning and walk again.’ Ric said.

A couple of months before leaving for France, they intensified their training.

The area they would be covering during the Camino was at around 5,000 feet, so altitude was not going to be a challenge for the Haskins. Looking back on the terrain, they both felt hills and inclines caused them some difficulty. Walking sticks helped get up some inclines and during steep downhill descents. 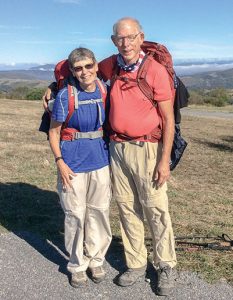 Betsy and Ric Haskins spent 39 days on a walking pilgrimage known as The Camino de Santiago, or otherwise known as “The way of Saint james” pilgrimage, which takes hikers through parts of France and Spain. The couple spent more than a year hiking around Berthoud in preparation for the hike where they averaged 14 miles a day.
Courtesy of Ric Haskins

During the latter stages of the walking routines, each of the Haskins carried a backpack with them, because during the pilgrimage they carried everything they needed — mostly just one change of clothing — with them. They estimate the weight of their packs to be 16 to 18 pounds each.

The Haskins took on this endeavor on their own. They were not part of a tour group and they didn’t have a guide. No reservations were made ahead of time either. The couple just walked as long as they could each day, then stopped for a night’s rest.

They both acknowledged the path had a strong support system of places to stay and eat. “This path has been traveled since 800 or 900 [B.C.],” Betsy said.

Hostels, called “albergues,” provided beds and shelter along the trail. “They are the low-cost way to go,” Betsy noted.

Each night it cost about $7 or $8 for a spot in a dormitory. Each town along the route had at least one hostel. It was run by the town. These facilities were usually large, with 20 to 50 pairs of bunk beds.

Many places had other hostels, including some run by local churches. These operated at a low cost or by donation. Young people with limited funds tended to use these hostels.

Most hostels had a coed sleeping setup. In many cases the bathroom facilities were coed too.

Lastly, private hostels with smaller rooms — four to six pairs of bunk beds each — rounded out the housing selections. The Haskins stayed at this type hostel on their rare rest days.

Only once along the way did the Haskins have difficulty finding a place of lodging. In one town they had to go to multiple hostels before finding one with empty beds.

“That was an anxious moment,” Ric remembers.

Eight days into the walk, after covering 120 miles, the magnitude of the distance hit Ric. He says he became sad and depressed. He likened it to a marathon runner hitting “the wall.”

Food was always in abundance each of the 39 days. Restaurants served what they called a pilgrim meal. This two-course meal, along with dessert, went for about $11 or $12. This full meal began with soup or salad, followed by a plate of meat and potatoes and cake, fruit, etc.

Betsy estimates that 200,000 to 300,000 people take part in the pilgrimage every year. Even though most of the way others are around, there is a chance of taking a wrong turn. The Haskins did this once. Betsy termed it as being “seriously off the trail.” That added four miles to the distance they logged that day. Ric felt all during the trip God would take care of them. Ric says, “He took us back to the right path.”

In the countryside distinctive shells mark the trails. Yellow arrows are painted every few blocks in towns. The arrows are not only guideposts but also signify walkers are moving forward in many ways. The couple confessed when they lost their way they were talking and missed one of the signs.

People all across Spain regard what hikers do as something significant. “They honor you.” Betsy stated. Local people along the way greeted the walkers, wished them a good walk or said “God be with you” in Spanish. When hikers encounter each other they would say the same thing.

The Haskins had many insights and takeaways from their pilgrimage. As they expected, there was a large spiritual component to what they did. The people they talked to along the way were doing the walk for various reasons. Many of these reasons were personal. They met one man contemplating ending his relationship with his wife. He was walking and thinking. Other travelers were unhappy in their work. Some just had issues to sort out. Some, like the Haskins, just wanted to see if they could do it.

The duo agreed the biggest impact was just walking with people from all over the world. Ric speaks Spanish, so there was no language barrier. In many cases they were able to communicate with those from other countries with English.

“It was easy to get right down to what’s important about life,” Betsy said. She felt everyone walking had a common purpose and goal. The Haskins met people and within minutes were talking about significant issues.

There is a saying in Spain about the pilgrimage: that it makes us all equal. In addition to the wide age range of walkers, the Haskins noted no one knew each other’s wealth or status in life — or lack thereof.

“We found that even the male-female distinction fades. We are just people,” Betsy said, calling this a rich take-away. “It was a wonderful look at humanity,” she added.

A component they did not anticipate, or at least consider ahead of time, is they felt they were in God’s land. It was a bonus to be outside in nature every day for more than a month — regardless of the weather. It put the couple in touch with nature.

“We knew that God was going to be with us,” Ric said humbly. Also, the Berthoud couple had to rely on each other a lot.

Betsy noted people’s definition of “God,” or a higher power, may vary, but the pilgrimage remains popular, even though in many cases not as many people are attending church currently. “This says something about a spiritual hunger,” is Betsy opinion on why she felt people did the walk.

Both Ric and Betsy admit to still having dreams about being on the Camino trek. They also agree they miss it.

The have learned many people repeat the event over the years. They now realize even though people do go back, they are not repeating the experience. Each time, the people along the way are different and the daily trips vary in length, which means finding different hostels for each evening.

The Haskins would consider repeating the 500-mile journey.

“It’s possible,” Ric said of another pilgrimage to Spain. But, he says there are other things on his bucket list. He wants to work on this list and do one or two trips a year.

Ric mentioned it would be important to train his body again. A recent eight-mile hike made him realize his body did not maintain its level of fitness.

Betsy summed up the Camino de Santiago pilgrimage by calling it a spiritual journey.

“We knew it would be a lovely walk through a country we didn’t know.” Betsy said. “You are walking through over 1,000 years of history,” she added. She noted some of the roads they traveled were built by Romans.

“We didn’t want to fail. That’s what drove us,” Betsy said with determination. Covering 500 miles in 39 days when they thought it might take at least 50 days is far from failing.