More than a job; it’s who he is 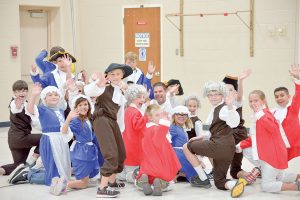 Ivy Stockwell fi fth grade teacher Jason Hooker, center, is surrounded by his class during a reenactment of the writing of the Constitution on Constitution Day in 2015.
Surveyor file photo

Ivy Stockwell fifth-grade teacher Jason Hooker has a knack for engaging his students.

According to Ivy principal, Rick Bowles, Hooker is an innovation teacher who always tries to find a different way to educate students and who’s always looking to excite and get them engaged in the lesson.

“He builds strong relationships with students, and the students want to work hard for him,” Bowles said.

Hooker always does a lot of interactive things with his students, such as reenactments in social studies where he’ll have students dress up in costumes and reenact a historical event. He also cooperates with other teachers to develop lesson plans for both classes. So, it was of no surprise when he was recognized as the Elementary School Teacher of the Year by the Thompson Education Foundation (TEF) at its eighth annual Educator Appreciation Breakfast and Educator of the Year awards at Embassy Suites Loveland on Feb. 26.

It’s a recognition that is humbling for Hooker, who has known he wanted to be a teacher since the eighth grade.

“It was an incredible honor and humbling experience,” Hooker said. “I can’t thank enough the foundation, the school district, Ivy Stockwell, my students, their parents, and my family, that have helped me to continue to grow as an educator. They understand that teaching is so much more than a ‘job’ for me; it’s who I am.” 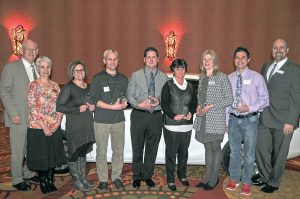 Parents say Hooker has incredible energy, enthusiasm and rapport with students, allowing for the kids’ creativity to flourish as they learn, according to a statement from the TEF. He was praised for his ability to “make sure every student feels special.”

It’s the same ability Hooker said he saw in a teacher of his who took the time to make a personal connection with him as a student.

“[Mrs. Guest] was my language arts teacher and, honestly, I don’t remember any writing rules or lessons she taught me, but what I do remember is coming to her class each day and feeling valued and loved,” Hooker said.

Hooker owes so much to all the teachers who have impacted his life; the ones who challenged him and his thinking; the ones who put in the extra time before and after school when he struggled; the ones who looked at him as more than just a “student.”

“The only way I can think to repay these teachers for all they’ve done for me is to be a teacher myself and try to do for my students what so many did for me,” Hooker said. “My students are a huge part of my family and I want them to leave my fifth-grade class knowing they too, are valued and loved…just like Mrs. Guest made me feel.”

Making connections with his students is the greatest part of his work.

“That distinct moment you go from being just the ‘teacher’ to ‘family’ is an indescribable feeling,” he said. “One that lasts a lifetime.”

The Thompson Education Foundation honored excellence in education with the recognition of six Thompson School District staff members during the foundation’s annual appreciation breakfast. Ninety-five educators were honored with nominations from coworkers, parents, students and community members. The nominees were evaluated by the Educator of the Year committee and the Thompson Education Foundation Board of Directors for excellence in education through their ability to empower, challenge and inspire. Criteria for selection for the awards included a candidate’s dedication to their work, a high level of skill, and the ability to inspire those they interact with in the course of their work.

Along with Hooker, former Turner Middle School principal, Dr. Bill Siebers, TSD’s chief human resources officer, was recognized as APT Employee of the Year. Administration nominators wrote that Siebers isn’t afraid to tackle the tough stuff and does it with compassion and confidentiality. He was singled out as a “true leader, highly motivated and inspirational,” the TEF stated.

The Thompson Education Foundation Educator of the Year recipient was chosen from among all the 95 nominees across the categories. Each recipient received a glass award and a $200 gift card from TEF’s board of directors. King Buick GMC provided two-month car leases for each category winner and a 24-month car lease for the 2016 Thompson Education Foundation Educator of the Year.
Hooker has been a teacher for 10 years, the past eight at Ivy Stockwell. He said his favorite subjects to teach are social studies and writing.

Bowles said he wasn’t surprised by Hooker’s recognition, saying it’s his dynamic personality in the classroom that makes students want to listen and learn.

“He’s been up for this award in the past too, and he’s well deserving of it,” Bowles said. “It didn’t surprise me. We have such excellent teachers here and he is certainly one of them.”