2014 is a year to remember for Spartans football 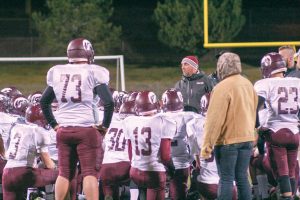 Berthoud head football coach Troy Diffendaffer talks with the team about the loss to Discovery
Canyon, 41-0, in the first round of the state playoffs on Oct. 7. It’s the first time the BHS football team has had postseason play since 2008.
Jan Dowker / The Surveyor

The Berthoud Spartans’ football program saw its season come to a close in the first round of the state playoffs on Nov. 7 at District 20 Stadium in Colorado Springs. Losing always leaves a bitter taste in the mouth of any competitor. But looking at the season – and not a single game – offers optimism for Spartans football.

Discovery Canyon Thunder, the No. 1 seed in class 3A, beat Berthoud 41-0 Friday night. However, even the cloud of defeat can have a silver lining. This silver lining is that next year the Spartans return a large number of players as experienced members of a playoff-qualifying team, which in itself is cause for a bright future. On offense, only one senior was a consistent starter. Berthoud’s defense, which was its most reliable strength all year, has four seniors who will graduate, but the depth chart offers very solid players who’ll step into the vacated roles.

During the regular season, Berthoud’s defense allowed only 137 points, placing them No.10 in the state out of 41 teams in the least points allowed. Even in the last two losses of the season to Discovery Canyon and Roosevelt, who during the regular season were the No. 1 and No. 2 rushing teams in the state, respectively, Berthoud held both teams below their season rushing averages.

In the Discovery Canyon game, with the exception of one 79-yard run, Berthoud held Discovery Canyon to 168 rushing yards, well below the team’s season average of 305 yards per game. Sometimes the score doesn’t tell the complete story, particularly when evaluating the progress of young athletes.

To punctuate and reinforce Berthoud’s defensive effort against Discovery Canyon, Berthoud forced Discovery Canyon to punt a season-high six times. Discovery Canyon averaged 2.3 punts a game in 2014. In other words, teams rarely stopped the Thunder’s offensive drives throughout the season and Berthoud did so at an exemplary level. 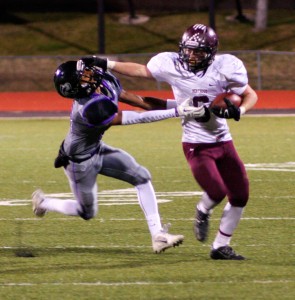 Berthoud’s Jimmy Fate stiff arms his oncoming tackler as he runs the ball up field against Discovery Canyon on Nov. 7 in Colorado Springs.
Jan Dowker / The Surveyor

Head Coach Troy Diffendaffer, who has historically had a defensive slant, and his defensive coordinator Jeremy Lanter, can stand proud behind an undersized Berthoud defense that found ways to use its personnel and strengths to its advantage.

A glaring – and very obvious – characteristic of the 2014 Spartans was their will to not surrender or quit. Even in their few defeats, the players played hard and through the whistle; not hanging one’s head, even during extreme adversity, is a quality to be admired. And this group, through its coaches, team leaders and, as players, didn’t succumb to a defeatist’s attitude; and that is a big part of being a winner.

Offensively, the Spartans had some bright spots during their turn-around season. Junior quarterback Cody Braesch threw for 2,174 regular-season yards and 18 touchdowns – No. 5 and No. 6 respectively in the Class 3A. Fellow junior and Spartans wide receiver Jackson Hall hauled in 11 of those touchdowns and recorded 752 receiving yards; fourth in the state in touchdowns and seventh in receiving yards in Class 3A. Braesch and Hall head into their senior year as potential top players at their respective positions.

Berthoud senior Kurt Hucal brought one of the most consistent kicking games in the state to the Spartans program. Hucal forewent his senior year of soccer to focus on football and his hard work paid off, resulting in 36 for 38 point-after attempts, along with two field goals. He finished as the No. 8-ranked kicker in Class 3A in the state and one of the most reliable point-after producers in Spartans’ history.

The hardest part of ending a season is saying good-bye to your seniors. Berthoud will return 18 players with significant varsity-playing experience next season, and the junior varsity and C team both played admirably during the season, offering even more depth to look forward to in the years to come.

Wins and losses will fade, but the time spent together as teammates will last forever. From the youngest, bright-eyed freshmen players to the oldest seniors, it’s the memories of working hard as a team, the bus rides (especially the ride home from Mead), seeing the stands filled at Max Marr Field and hearing the fans cheer, and those moments in the huddle, looking eye-to-eye with their fellow Spartans during the heat of battle, that will stay in the hearts of these young men.

For the Class of 2015 Spartans, including: Woodiel, De Moudt, Matt Bonds, Ryan Markham, Hucal, Ivan Warehime, Seabastian Gonzalez and Fisher Knudsen, thanks for your commitment to the football program and your brothers on the field; be proud that each of you were an important part of the resurgence of Berthoud football. That is something Spartans Nation will never forget.

Lastly, always remember that you are a Spartan and to never lay down your weapons, make your opponent come and take them.