Ellie Sundheim was all smiles after the state cross-country meet. Actually, the Berthoud senior is almost always smiling, and she truly deserved the joy filling up her small frame Saturday. 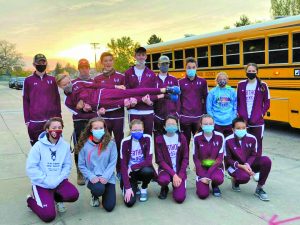 Sundheim ran a stellar race moving up from about 50th to finish in 24th place in the 3A Championship race. Her effort helped the Berthoud High School (BHS) girls place seventh overall in the team competition.

This is the highest place a Berthoud girls team has placed at the state meet, surpassing the 2010 team of Emma Otto (25), Stephanie Messick (31), Julia Leonard (54), Emma Degnan (69), Hannah Kirk (71), Dylan Fagler (75) and Ali Klaes (78), which placed ninth in 3A competition. The same group, except replacing Julia Leonard with Kiah Leonard, placed 11th in 2011. The Classical Academy won the team title both of those years, just as they did this year.

The state meet was half the size of previous years and athletes did not all get to start at the same time. The placing at last week’s regional meets around the state decided the starting positions of the individuals. The top-five finishers from each region were in the first wave. Forty-five seconds later the next wave started. It was difficult at times to determine the finishing places as some waves caught athletes from the wave in front of them.

This was the first time in Berthoud program history that both the boys and the girls have placed in the top 10 in the same year. Three senior boys – Eli Greenslit (38), Lane Pirkey (43) and Nick Williams (45) – had to start in the third wave of the meet, 90 seconds behind the leaders.

In this race within a race, experience plays a major role on the state course and knowing how to conserve energy early to be used later in the race is essential. Greenslit, Pirkey, Williams and freshman Afton Cooper started in the third wave of 25 athletes, meaning 50 athletes were already on the course ahead of them. They were racing against the clock.

Greenslit was approximately the 50th athlete across the finish line, with Pirkey and Williams following closely. However, after the times had been compared Greenslit finished in 38th place, Pirkey was 43rd, Williams was 45th and Cooper was 62nd. Berthoud’s final two racers were in the fourth wave. Evan Torres finished in 70th and Wyatt Schmidle was 72nd. They had beaten the times of most of their wave and athletes who had been ranked ahead of them.

“Eli has hardly trained lately because of his Achilles injury. Lane and Nick knew all they had to do was stay close. Afton is going to be special. He was not too fazed being a freshman in state.” Berthoud will graduate the top three, but Jennings is feeling positive about the future saying, “This younger group got experience today. Daniel Hatton was the alternate so he could get state experience. This group of young guys want to train. They are motivated.”

Olivia Krueger and Jaycee Williams started in the first wave of the girls’ race. Krueger had hoped to run in the lead pack but the race strung out early and Krueger found herself as a single runner chasing a line of girls. Krueger finished in 14th place.

Williams took a more conservative approach to the race rather than starting in the shadow of Krueger like normal. The strategy worked for the freshman and she finished in 19th place. Sundheim and Ally Padilla were in the second starting wave. Sundheim executed well, staying within herself in the beginning, knowing she would be able to summon the strength she has built up the past four years. As the hills got tougher, so did Sundheim. She looked like the Little Engine That Could powering through the second half of the course. She moved up from about 50th place to finish in 24th place.

Unfortunately, as Sundheim was having her best cross-country race, Padilla was struggling. Having felt like her hip had popped out of joint right before the start of the race, the junior was fighting through the pain. Finally, she felt like her hip had gotten back into the correct position and she charged to the finish line. Always the competitor, Padilla finished in 41st place.

Josie Diffendaffer and Gabby Hernandez were in wave four. Being one of the fastest in the final wave, Diffendaffer ended up in a similar position as Krueger having to run most of the race without many people around. She caught some of the slower runners from the previous wave but essentially raced alone most of the time. Diffendaffer finished in 75th place. Hernandez (84) also had trouble with her hip and ended up in the medical tent for a bit after the race.

When asked how he felt about the girls placing, Jennings said, “We didn’t see much 3A competition (this season) so we didn’t really know where we stood coming in. Only 20 points separated seventh from third on the girls side. With all of the circumstances, COVID, poor air quality, having to train on treadmills … we’re good with it.”

“We lose Ellie but the rest of them are all back. They’re motivated to get back there and do well next year. We are developing a healthy culture. The team is excited for track,” said Jennings about the experience.

For postseason competition, the team usually travels to in Arizona to the Nike Cross Regional (NXR) meet. The meet is being held virtually this year. Teams run an established course and send in times to be compared to nearby states. The team will race at the Liberty Bell course, one of the fastest in the state, to post times for NXR.